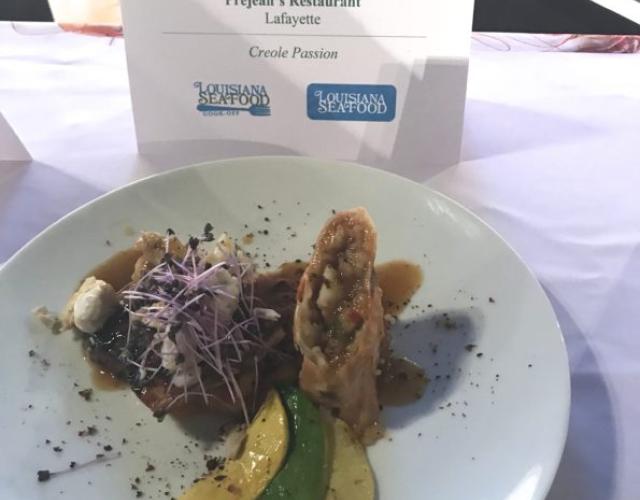 Chef Austin Kirzner grew up in New Orleans, always underfoot in the kitchens of his mother and grandmothers and fishing with his father and uncle. In sixth grade, he made Redfish Court Bouillon for a school project-he always knew he wanted to cook. Kirzner studied Hospitality Management at the University of Southern Mississippi, then earned...

Salt and pepper, to taste

Salt and pepper, to taste

Half a lemon, thinly sliced

Salt and pepper to taste

Half a lemon, thinly sliced

Salt and pepper to taste

Season fillets with salt and pepper. Heat olive oil in a cast iron skillet, then sear fillets until golden brown.

Place the potatoes into a large pot and cover them with water and crab boil seasoning. Over high heat, boil the potatoes until fork tender. Drain, place potatoes in a large mixing bowl and add all remaining ingredients but the shrimp. Mix until completely and evenly incorporated. Add the boiled shrimp and mix.

Clean the softshell crabs, removing the eyes and water sac, and pat dry. In a pot over medium heat add the butter, onions, shallots, garlic, and saffron, cooking onions until translucent. Next add the softshell crabs and cook for 5 minutes. Deglaze the pot with the chardonnay and add the fresh parsley leaves. Next add the heavy cream and bring to a soft boil. Slowly whisk in the blond roux and cook for 10 minutes. Blend with a hand blender until smooth, then strain through a chinois and season with salt and white pepper.

To serve, plate the snapper on the potato salad and top with softshell crab saffron bisque. Top oysters with pickled crawfish aioli.

Show off your culinary skills. Share pictures of your finished dish on social media and tag them with #LouisianaSeafood!