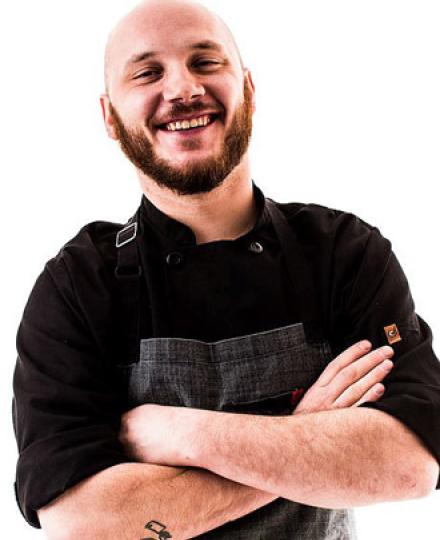 Born and raised in Cottonwood Heights Utah, Logen Crew is the new Executive Chef overseeing the culinary direction of Current Fish & Oyster. Previously he served as executive chef over for Fresco Italian Café in Salt Lake City. Logen started his career at the age of 18 working in the kitchen for the Trio Restaurant Group.
Logen was constantly hungry to gain as much experience as possible. He took every chance he had to work with the state's top chefs, assisting at private events and cooking in top kitchens. Logen followed Chef Dave Jones to Log Haven, where he learned the secrets of one of Utah's top chefs and worked as his sous chef. Three years later he returned to Fresco to take the role of executive Chef. While under Logen’s direction, Fresco won many awards, including Salt Lake magazine's “Best Italian” in 2014, and “Best Italian” and “Best Restaurant” in 2012.
Since opening Current Fish and Oyster has earned accolades such as being listed as one of Open Tables “Top 100” best restaurants in the country and Salt Lake Magazine’s “Best Restaurant”.
Logen is currently working on Season 2 of a local tv production, Teen Chef Pro, in mentoring young Pro Start Program students while they compete for culinary scholarships.
When he’s not in the kitchen, Logen enjoys camping and cooking with friends, and spending time with his dog Sage.