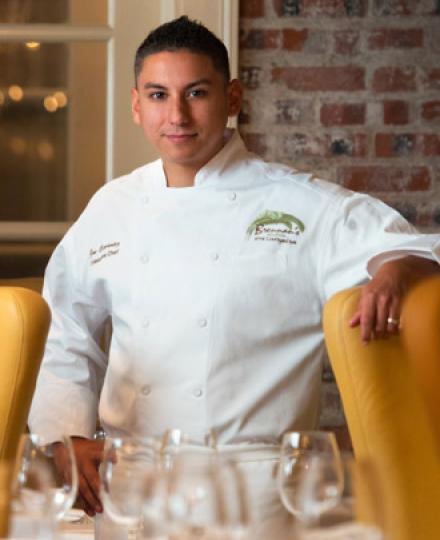 Executive Chef Joe Cervantez describes his return to Brennan’s of Houston as a homecoming to a kitchen both familiar and influential. Having trained under the restaurant’s former executive chef, Cervantez reveres the classic Gulf Coast-Haute Creole menu and looks forward to maintaining its time-tested appeal while introducing new takes. “There are not a lot of other restaurants in Houston who have such gravitas,” Cervantez says, excited to be back among Brennan’s rich history. “You have, for example, the iconic turtle soup—a dish that, in itself, creates memories—as well as our tableside cooking, which makes a meal so experiential, so unforgettable.”
In addition to helming the kitchen, Cervantez oversees staff training, cooking classes, banquets, and distinct culinary programs including The Kitchen Table, Wine Table, and Chef for a Day. “As executive chef, I like to greet the guests, learn more about them—staying behind the scenes is hard for me,” he says, “so I feel right at home at Brennan’s of Houston, which encourages personal service.” As for his leadership style within the kitchen, “I’m an observer and a listener first,” he explains. “I like to coach my team one-on-one, and then build confidence in them to take responsibility and do their own creative work.”
At the age of 15, Cervantez began working at restaurants in his hometown of Pearland, TX. One such restaurant piqued his culinary interest, as the layout required him to leave every night by passing through the bustling kitchen. The lead chef noticed Cervantez’s frequent observations, and told him that if he could flip an egg without breaking its yolk, he would let him work brunch. A half a case of eggs later, Cervantez succeeded and thus began his culinary journey.
While undergoing formal training at The Art Institute of Houston in 2006, Cervantez signed on with Hilton Americas-Houston as a culinary supervisor, and later chef de cuisine, at the hotel’s Skyline restaurant—a chef-driven operation that taught him the skills needed to run every cook station, as well as in-room dining, lobby bar, and banquet operations. During his Hilton tenure, the property’s upper management nominated him for the “Hilton Pride Award” on three separate occasions. In 2010, Cervantez joined Brennan’s of Houston as sous chef, growing his kitchen skillset, and learning the iconic cuisine.
Four years later, Cervantez accepted Ronnie Killen’s—of the critically acclaimed Killen’s Steakhouse— offer to be executive chef role at the luxurious restaurant in both Killen and Cervantez’s hometown of Pearland. In addition to expanding and strengthening his culinary chops, the opportunity earned him recognition as “Upand- Coming Chef of the Year” by My Table Magazine in 2016. When the executive chef post at Brennan’s of Houston became available in early 2017, however, Cervantez jumped at the chance to rejoin the culinary landmark, spending time at historic sister restaurant Commander’s Palace in New Orleans for an immersive refresher before settling back into the Houston kitchen.
If Cervantez is not in the kitchen, then he can be found with his wife and their two young children, exploring museums, cooling off at local splash pads, and caring for the family herd: two small dogs and a bunny.