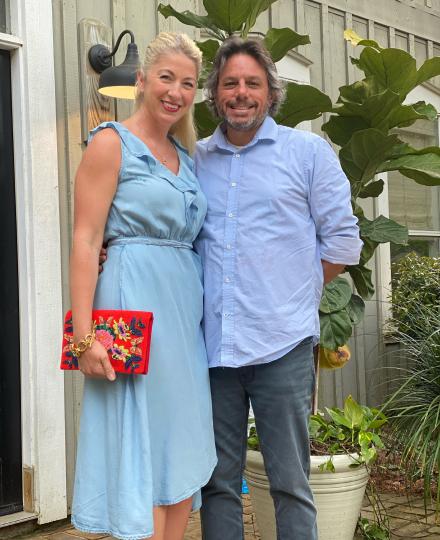 At an early age, Keith and Nealy Frentz both had aspirations of someday owning a successful restaurant.
Keith was born and raised in Covington, Louisiana and Nealy was born and raised in Southern California, then moved to Biloxi, Mississippi.  Those dreams came true when they opened the doors of LOLA in Covington, Louisiana in January of 2006.
Prior to the opening restaurant they both held Sous chef positions at world famous Brennan’s Restaurant on Royal Street in New Orleans. There, they each learned the ins and outs of fine dining kitchen culture and interaction with a variety of people. It was not until hurricane Katrina came when their reality of restaurant ownership would come true. They evacuated to Covington and one year later LOLA was born. Nealy was 23 and Keith 28.
Keith and Nealy both graduated from the prestigious Johnson & Wales University with degrees in culinary arts which gave them the knowledge and fundamentals of understanding the kitchen. Together with family, schooling and kitchen life at Brennan’s has helped sculpt LOLA into what it is today, one of the best restaurants on the Northshore. They are always looking for room to grow and better the community. LOLA supports the farmers of the Covington farmers market as well as local seafood suppliers. We love to keep it LOCAL at LOLA.
LOLA is located in downtown Covington across the street from the St. Tammany Parish courthouse. The building that houses LOLA is the city’s’ historic train depot with a secondary dining room located in a renovated 1920’s dining car. The kitchen is in an actual train caboose. All the original doors and brick make this restaurant very unique. Large crowds fill the restaurant for weekly lunch and weekend dinners. Lola recently celebrated 15 years in business.
Both Keith and Nealy enjoy spending time with their two kids and enjoying life outside the kitchen whenever they get the chance.