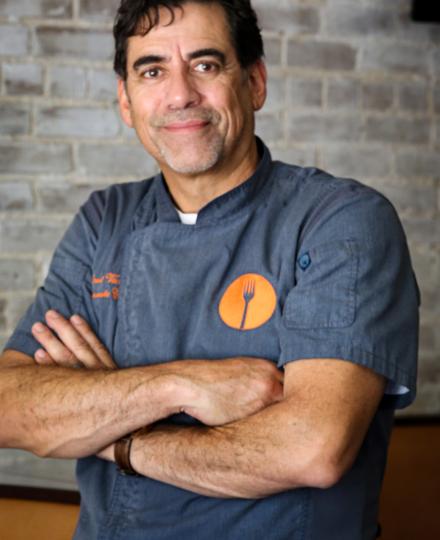 Chef Vasquez first fell in love with ingredients and recipe development in his mother’s kitchen. She was his first culinary instructor and also his first real boss when he began his career as a dishwasher in his family’s restaurant where his mother was chef. The flavor profiles he learned under her tutelage remain influential in his cuisine to this day.  From the ingredients and techniques of the Southwest kitchen, Chef Vasquez moved on to become saucier in a French fine dining setting.  He continued to collect skills from Spain, Mexico, Bermuda, California, China, Singapore, and finally, Louisiana.  Whether it was Chef Cary Neff (his mentor for the last three decades), Master German Chef Peter Shaumberg, Swiss Master Chef Otto Weible, or Mr Bill the prep cook, Robert absorbed and learned from every interaction. Vasquez’s culinary curiosity also led him to spend some time in the retail side of the food industry. As a member of Whole Foods’ leadership team, he developed recipes, created retail display and food programs, and assisted in the setup and opening of new stores across the region. During that time, Vasquez was able to gain a unique education in organic, healthy products and to develop a deep understanding the production and processing of meat and cheese products as well as the sourcing of produce. Today, Chef Vasquez draws on his vast restaurant, catering, and retail experience to bring a fresh culinary experience to the Louisiana Northshore at PePe’s Sonoran Cuisine in Covington.  The reason he has so much love and respect for Louisiana seafood is the simplicity and variety of offerings.  “An ingredient like blue crab or fresh-caught red snapper does not need to be hidden in a complex recipe :  it ’ s all about the possibility in thei ngredients and the passion in the chef! ” Honors & Affiliations LA Fisheries Summit, Cooking Competition Winner 2016 Chef Demonstrator, Vanishing Paradise Event, National Wildlife Federation, 2017 NOWFE, Silver Medal 2016, Gold Medal 2004 Best New Chef in Asia, Beijing 1992 Five Diamond Award, Marquesa, Scottsdale, AZ Mobile Five Star, Marquesa, Scottsdale, AZ Best New Restaurant, USA Today, Maquesa, Scottsdale, AZ Golden Scepter Award, French Restaurant Marius, Coronado Island, CA Flip My Food w. Chef Jeff Henderson Beat Bobby Flay, Food Network