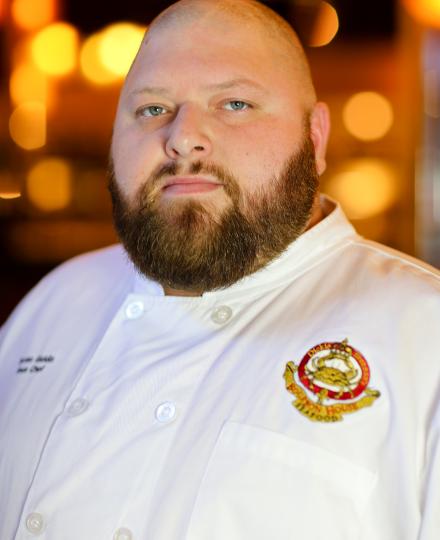 Chef Devan Giddix has always been only a stone’s throw away from fresh seafood. His first foray into the culinary industry was working for a caterer on the Connecticut shore in high school. He got to do a little of everything from cooking and serving to washing dishes and delivering orders. This experience led him to the Culinary Institute of America (CIA). As part of their externship program, in 2004 he traveled to New Orleans to work at Palace Café. For five months he trained under Chef Darin Nesbit and fell in love New Orleans and its culinary lineage. He returned to CIA to finish his degree, with the idea that he would return to New Orleans. Katrina happened during that time, making him weary of whether his dream could become a reality. But nonetheless in early 2006 he picked up the phone and called Chef Darin. Before he could even ask about a job, Chef Darin asked him “when can you start?”
Three weeks later he officially began his career with Dickie Brennan & Co. He went from cook, to lead cook at Palace Café and then to sous chef and eventually chef de cuisine at Bourbon House. Along the way his appreciation of seafood, especially Gulf seafood has grown. Chef Devan gets his inspiration through the seasonality of food and the way that ingredients at their peak freshness speak their own culinary language. He loves the way food brings people together and gets his energy from making guests happy through his dishes.
If he’s not a work, you’re likely to find him at home with his wife, playing with their dogs and cooking something up on the grill (likely that something being local seafood).