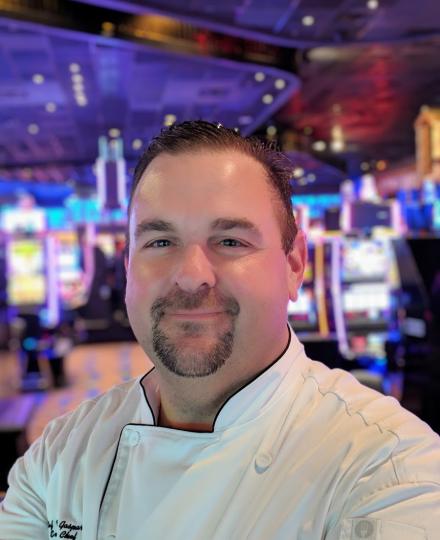 I was born in Abbeville, La and raised in New Iberia, La. I attended Delcambre High school. After graduation I attended the Culinary Arts Institute of Louisiana while attending culinary school I work as a cook at Juban’s Restaurant in Baton Rouge, La After culinary school I returned home and worked at Rip Van Winkle gardens in Jefferson Island.  In 1999 I was promoted to Executive Chef at Rip Van Winkle gardens I held that position until the restaurant closed in 2001. After leaving Rip Van Winkle Gardens I came to join the team at Cypress Bayou Casino in 2001 as a Roundsman of Café Bayou. Soon after in 2002 I became Banquet Chef in the Pavilion at Cypress Bayou Casino. Then in 2004 I became the Restaurant Chef of Café Bayou and stayed in that position until 2012 when I was promoted to the position of Executive Sous Chef. In 2018 I was promoted to Executive Chef. While at Cypress Bayou Casino I have had the privilege of going to many culinary competitions around the gulf coast winning over 100 medals and many other various awards.
I love working here at Cypress Bayou Casino Because of the diversity of all the restaurants we have to offer. I also love all of the talented team members that we have here to make all of what we have to offer come together so well. I look forward to keeping our restaurants here fun and fresh for our guest. When not cooking I love to be with family and friends enjoying outdoors, fishing, and hunting in our great state.