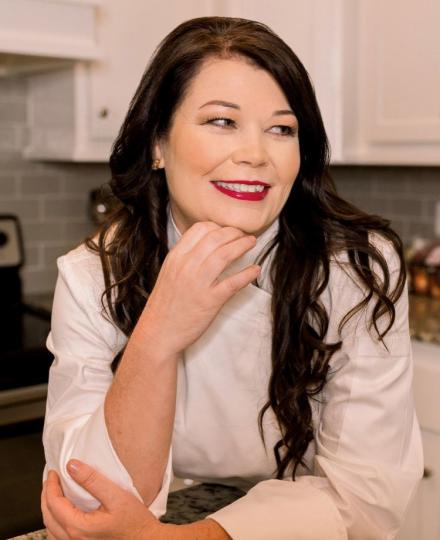 Chef Johnnie Landry is a talent influenced by complimentary, close contrasts. Born in the deep south of Louisiana, she spent her formative years being influenced by both her Grandmothers. Each taught her of the immense bounty that nature and her beloved Louisiana offers. Spending summers on Belle River Bayou and on the Gulf Coast, one grandmother taught her how to harvest and cook a variety of fresh Louisiana seafood, from pulling crab, catching fish and cooking etouffee. Her other Grandmother taught her lessons of the land, raising chickens, picking okra, sun ripened tomatoes, making chow-chow and canning figs. Because of her Grandmother’s patient lessons Chef Johnnie not only learned how “to master” Cajun cooking but perhaps more importantly, learned how “to source” the freshest ingredients she chooses to cook.
After high school Chef Johnnie attended Mississippi State University and in 1994 earned her Bachelors of Science degree in Poultry Science. Having mastered Cajun cooking she went on to work in Alabama and Georgia expanding her cooking repertoire to include a vast array of Regional Southern Cuisine. Away from home her well-rounded cooking skills earned her many friends, and as any good Cajun, she gathered them into her kitchen – her cooking and their camaraderie feeding both the stomach and soul.
She returned to Louisiana, totally “in love” with cooking which sealed her reputation and cultivated a dedicated fan base prompting the opening of her own business, Cajun2geaux Catering in 2014. Johnnie also vied in manycook-off competitions across the state for years placingsuperbly. Successful at business management she decided to hone and expand her culinary skills enrolling in the SLCC Culinary Arts Program. Her reputation attracted the attention of the owners of an increasingly popular and successful eclectic Cajun culinary experiment known as The Little Big Cup in Arnaudville Louisiana. Here she takes the helm as Chef of the restaurant on the bayou, finding her on an exciting culinary journey, now coming full circle into fruition. Her talent, having expanded to master the culinary classics and a rising name on a creative platform, finds her sought after for her cooking as well as television, print and social media appearances and interviews.