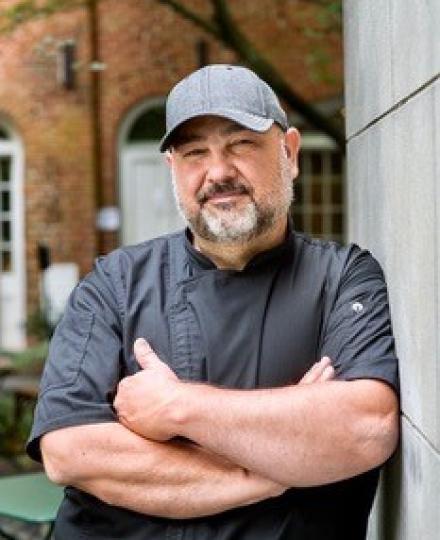 Chef Jerry Mixon was born in New Orleans and was raised in St Bernard Parish in Southeast Louisiana. He is a 13th generation New Orleanian. Jerry’s first job at 15 was stacking soda bottles at his uncles restaurant in Chalmette. This job was his first exposure to a professional kitchen. He was surrounded by the many great cooks in his family but he learned to cook from watching and helping his mother Linda, numerous aunts, and his beloved grandmother Mabel who worked in the kitchen of his uncle’s restaurant for 25 years. Many of Jerry’s family members are shrimpers and fisherman by trade which always meant fresh seafood was constantly on the family tables. While still in high school Jerry’s passion for cooking led him to attend the Culinary Arts Program at Elaine P. Nunez Community College in St Bernard Parish. Out of high school, Jerry joined the Delgado College Culinary Program where he met Chef Paul Prudhomme who selected Jerry to work at the original K-Paul’s restaurant in the French Quarter.
Now as a Chef, Jerry went on to work in several kitchens around New Orleans then was appointed the Executive Chef position at the renowned Kaibo Yacht Club in the Cayman Islands. Chef Jerry was able to continue his South Louisiana style of cooking but infusing it with a Caribbean flavor and true Creole roots. After several years in Cayman, Hurricane Ivan brought Chef Jerry back to his beloved New Orleans where he along with Susan Hoffman and Danny Akers created Cafe Amelie in 2005, just months before Hurricane Katrina. Cafe Amelie is consistently recognized as the premier courtyard dining destination in New Orleans. Chef Jerry’s menu at Amelie is diverse, but features a modern interpretation of New Orleans cuisine. Chef Jerry’s passion is keeping south Louisiana Cuisine true to the recipe with modern twist. “I have grown up on Cajun/Creole comfort food and my passion is to keep that part of my heritage alive” Having survived two devastating hurricanes in two years, Chef Jerry has never lost his love for great Louisiana Seafood and his beloved New Orleans. Jerry is excited to share his passion in the 2019 Louisiana Seafood Cook-off.