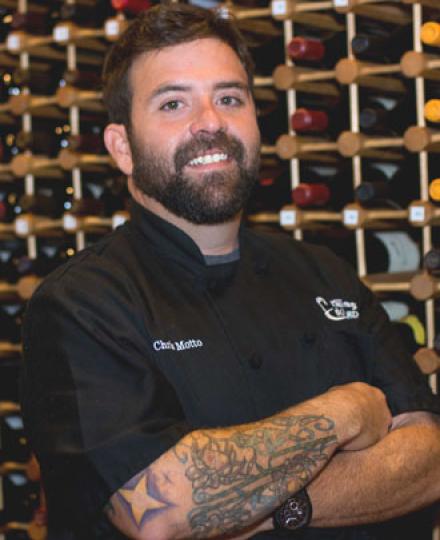 Growing up in south Louisiana, Chris Motto was surrounded by some of the country's best food at an early age. Not a weekend would go by without a bbq, crawfish boil, fish fry, or sunday dinners at grandma’s. It was then he began to realize the power of good food to bring people together and celebrate life. Not knowing at the time that helping around the kitchen would lead to his future passion and career.
After graduating high school, Motto moved to Baton Rouge to attend Louisiana State University where he would obtain a degree in political science. While in college he worked in several restaurants to finance his continuing education, but didn’t stop there. Constantly pushing himself to learn more about food from all of his co-workers and travels, as well as chefs. Hard work does pay off and led him to his current position of Executive Chef of Mansur’s on The Boulevard, a Baton Rouge staple and premiere upscale restaurant, where he has worked for the last 10 years.
He continues to enjoy countless hours in the kitchen, using the freshest local ingredients and seafood. He is most proud of his ability to give back to the community and mentor younger chefs, thus furthering his passion for great food and relaying everything he was fortunate enough to learn to others; Not only trying to push them to create great food, but trying to help the city as a whole become a culinary destination. A happy chef makes a good sauce and it is evident that he truly enjoys his career path with success in local cooking competitions, including Slow Food Fall Heat, Baton Rouge Oyster Fest, Gulf Coast Taste Challenge, and multiple Fete Rouge medals.
Chef Motto was recently able to showcase his skill set while competing on Season 18 of Fox’s globally viewed Hell’s Kitchen. Working under Chef Gordon Ramsay is amongst the top of his achievements. Remaining true to himself, Chef Motto passed on a potential opportunity to relocate to Las Vegas. Choosing to continue what he started in Baton Rouge and share the wealth of knowledge he obtained while working and filming in California. Chef Motto was honored as part of the Forty Under 40 by Baton Rouge Business Report in 2018 and will continue to push himself as well as the great cooks whom he surrounds himself with great events such as the Louisiana Seafood Cook Off and as lead chef for the upcoming March of Dimes signature chefs auction.