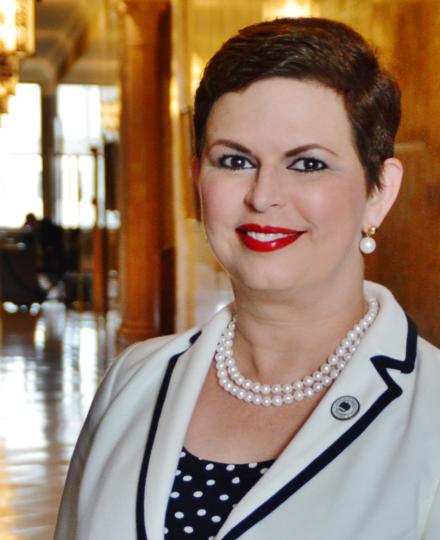 Julie Stokes is a Certified Public Accountant, small business owner and conservative State Representative from Jefferson Parish, Louisiana.
Rep. Stokes is actively involved with Jefferson Chamber of Commerce, the University of New Orleans Alumni Association, the Louisiana Society of CPAs and local economic development activities, including the Kenner Economic Development Committee. She is Chairman of the Sales Tax Streamlining and Modernization Commission which has been working tirelessly to bring repair to the state's fractured sales tax system. Rep. Stokes is also Chair of the Legislative Audit Advisory Committee and serves as one of only two interim members on the Joint Legislative Committee on the Budget. She also serves on the House Executive Committee, Ways and Means, Health and Welfare, and Joint Legislative Committee on Capital Outlay.
Nationally, Rep. Stokes serves on the Executive Committee of the National Conference of State Legislatures (NCSL). She is very actively involved with the Task Force on State and Local Taxation of NCSL. She also serves as Co-Chair of the Budgets and Revenues Standing Committee of NCSL.
She was recognized nationwide as one of a handful of State "Tax Legislators of the Year" by State Tax Notes and received an award for "Outstanding Achievement in State Tax Reform" from the Tax Foundation for her work on Sales Tax reform in Louisiana.
She received the Southwest Chamber Louisiana's Fusion Five Award for best new up-and-coming legislator in 2015. In 2016, she was named one of four "Women of Distinction" by the Girl Scouts of Louisiana East. She has also been honored as one of New Orleans City Business Magazine's "Women of the Year" in both 2003 and 2014.
Rep. Stokes traveled the state of Louisiana with the Committee of 100 in 2015 and 2016 as one of the lead speakers on Tax Reform in Louisiana, earning accolades from many media outlets such as New Orleans Advocate, the Baton Rouge Business Report, and WKRF as one of the most knowledgeable Louisiana legislators in the field of Louisiana's fiscal environment.
Before public life, Rep. Stokes served as a Commissioner of the Regional Transit Authority and as President of the Chateau Estates Civic Organization, the Accounting and Financial Women's Alliance, and the Jefferson Chamber Young Leaders.
Rep. Stokes resides in Kenner with her husband Larry and their two children, Brandon and Taylor. She attended Jefferson Parish Public Schools, and attending the University of New Orleans on full scholarship where she received her Bachelor's of Science in Accounting, Magna Cum Laude.
In 2017, Rep. Stokes sought to become Louisiana's State Treasurer but exited the race after being diagnosed with breast cancer.
OTHER AWARDS INCLUDE:-University of New Orleans Homer L. Hitt 2017 Distinguished Alumna- 2017 Graduate of Governing Magazine's Women in Government Leadership Program- "Economic Development Ally" in 2017 by the Louisiana Industrial Development Economic Association- "Champion of Economic Development" in 2013-2016 by the Louisiana Industrial Development Economic Assocation- Louisiana Family Forum's "Liberty Award" in 2014-2016- Louisiana Family Forum's "Family Advocate" in 2014-2016- "Small Business Champion" in 2013 and 2014 by the National Federation of Independent Business- "Legislative All-Star" in 2014 by the Louisiana Association of Business and Industry- "Legislator of the Year" for 2014 by the Louisiana Orthopedic Association- Education Choice Champion by the Louisiana Federation for Children's in 2013 and 2014