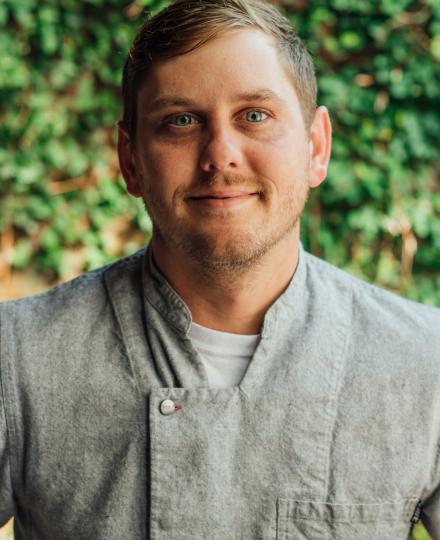 Blue Dog Cafe announced that Ryan Trahan will serve as executive chef, bringing his inventive cuising and reimagined classics to the landmark establishment. Enhanced by the elevated hospitality that defines Blue Dog Cafe, the menu will feature new dishes like a Jumbo Lump Crab Cake, Charbroiled Oysters, Pork Fried Catfish Chips, Pompano En Papillote, Half Roasted Chicken and Buttermilk Pie. "We have been watching Ryan make an impact on the Louisiana culinary scene for a while now and could not be more excited to have him join the Blue Dog Cafe," said Jacques Rodrigue, co-operator of Blue Dog Cafe and son of artist George Rodrigue. "Ryan is the perfect chef to continue Blue Dog Cafe's tradition of serving as a destination and cultural hub that pays tribute to Dad, his artwork, and Cajun culture."
Ryan Trahan was most recently chef/owner of the restaurant Dark Roux, the acclaimed, regionally inspired, sustainable Southern concept in Lafayette, Louisiana. At Dark Roux, Ryan was named a 2017 "Chef to Watch" by Louisiana Cookin' Magazine. Ryan was raised in Crowley, Louisiana with roots firmly established in Louisiana home cooking. Ryan will focus on the community with fresh, regionally inspired, sustainably sourced local cuisine focused on southern hospitality and Cajun culture.
"Blue Dog Cafe has been a Lafayette institution for nearly twenty years and it's an honor to use my cooking skills to continue the work of George Rodrigue and tell the story of Cajun culture," says Chef Ryan Trahan. "I look forward to bringing a more modern perspective on Cajun cuisine to the restaurant while being dedicated to quality ingredients."