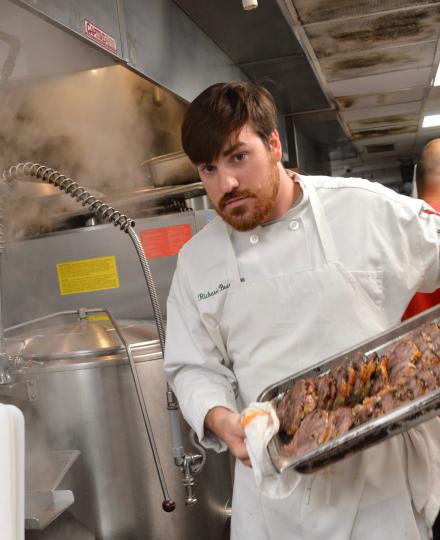 As a member of the legendary Brennan family, Richard grew up in restaurants. Growing up he learned the ropes working in various positions at his family's restaurants. Through these experiences he realized that his passion was with the back of house and culinary operations. While earning a degree in Hotel, Restaurant and Tourism Management at the College of Charleston, Richard trained under acclaimed chef and advocate for sustainability within the food industry, Craig Deihl. It was with Chef Deihl that Richard developed his interest in butchery and helped define the career path he was to pursue. Richard enrolled in the Culinary Institute of America at Greystone. After completeing his formal training he traveled to Italy to complete a rigorous internship with Dario Cecchini, the famed and lauded butcher from Panzano in the Chianti region. Here Richard honed his butchering skills and grew an even greater appreciation for the chef's role as a steward for humane treatment to livestock.
Over the past several years, Richard has honed his culinary skills with other internships, including with Thomas Keller at the French Laundry as well as an apprenticeship in charcuterie with Master French Chef, Rene Bajeaux.
An avid outdoorsman and chef, Richard enjoys hunting and fishing and then preparing the bounty to share with friends.