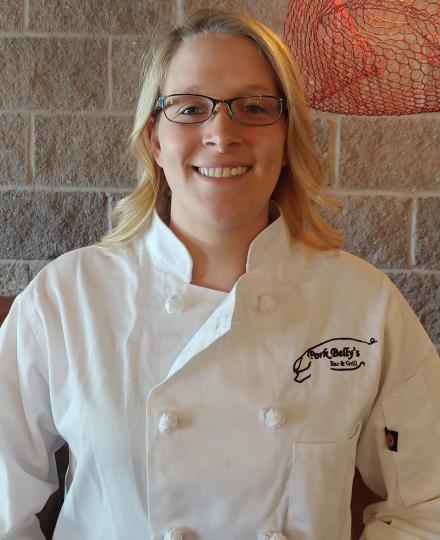 Paige Lucas native to Avoyelles like most Cajun girls spent the early years in the footsteps of grandparents learning the way around the kitchen. The love for all Louisiana ingredients is built in the soul of individuals who appreciate the rice culinary playground we call home. Growing up with family gatherings food is culture, "eating is an intimate event even just for casual dinner".
Paige's professional career started with the enrollment into culinary school. Louisiana Culinary Institute being one of the best culinary schools in the state made it easy to acclimate to the service industry. Taking full advantage of what was offered in school Paige worked many festivals and exclusive events. Upon graduation from culinary school the only one of her class to apply and pass her American Culinary Federation Certification. Continuing to hone her skill set after graduation, she attended the Canne Film Festival in France cooking for the American Pavilion. Returning with ideas and better work ethics for the craft. Another event that Paige is most pround of is attending the Master's Golf Tournament in Augusta, Georgia. "Running an expo position for a kitchen with a hundred-foot line is an adrenaline rush and pushes you to your limit." Being asked back for the second year gave some assurance that the passion she chose was right for her. After enjoying living in Baton Rouge and working throughout the state, she returned to Avoyelles. Returning to a small town gave her the opportunity to manage the kitchen of a seafood restaurant. Many months later the idea of her own concept restaurant begun. Almost two years later and lots of hard work from family and her own hands, Pork Belly's Bar and Grill was finally born, "it's combination of all that Louisiana stands for". From fresh, slow roasted hard trimmed pork belly to the familiar gulf shrimp appetizers light and simple. Pork Belly's serves decadent food and refreshing drinks, "we strive for better, not perfection". Only twenty-seven with an even younger original restaurant concept we hope to prove our worth in this year's Louisiana Seafood Cook-off.