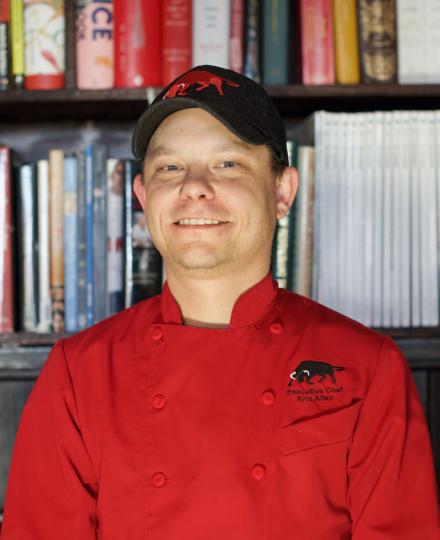 Kris Allen was born and raised in Southwest Louisiana. As a child, Allen worked on a boat with his father, a professional shrimper and fisherman out of the port of Delcambre. He spent as much time in the kitchen with his grandmother Cynthia, absorbing the traditions and techniques of Louisiana cuisine. From a very young age, Kris' approach to food was shaped by this first-hand knowledge of the bounty of the Gulf Coast, as well as the time-tested foodways of the region.
Although Allen has some culinary school education, most of his fundamental training was under the tutelage of Chef Scott Boswell. Kris proved his value in Boswell's kitchen at the Rainbow Ranch Resort in Big Sky, Montana, and so was offered the opportunity to join the opening crew at Stella in New Orleans. For several years, Stella was one of the most highly regarded dining rooms in the city, and Allen worked his way from station to station, learning as he went. After his tenure at Stella, Kris went on to spend time on the lines at Herbsaint and G.W. Fin's, as well as serving as sous-chef at the Bombay Club.
In 2011, Allen was chosen as executive chef at the French Quarter Louisiana Kitchen in Chicago. Under Allen's leadership, the restaurant won accolades from the Chicago Daily Heraldn and the Sun Times. Over his two year tenure, Allen honed the leadership skills and the reputation for excellence and attention to detail that are his hallmark to this day.
Upon returning home to Lafayette in 2013, Allen worked as the executive chef at the Saint Street Inn, helping to hone that beloved local institution's approach to seasonal and local ingredients. A year later, he came into the kitchen at Pamplona, rapidly climbing to the executive psoition at this highly acclaimed tapas restaurant. Under his leadership, Pampllona has become more popular and well regarded than ever.
Chef Allen's approach to seafood has been shaped by his time in some of the country's best kitchens, but at base his approach depends upon the fundamental awareness of freshness and quality shaped by his time on his father's boat and in his grandmother's kitchen. He is an exemplar of the livning tradition of Louisiana cuisine, his mastery ably demonstrated by his triumph in the Best Gumbo category at the prestigious Black Pot Festival and Cook Off in 2017.