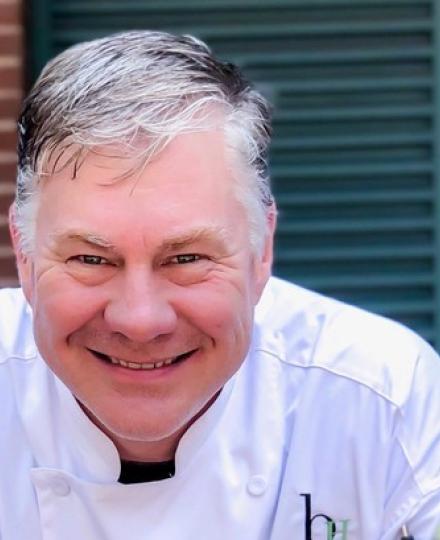 Justin Ferguson is a Baton Rouge native and Army Veteran who completed two tours in Iraq before enrolling in a culinary arts program at the Louisiana Culinary Institute (LCI) in 2005. After graduating from LCI, Ferguson moved to Boston and worked as a line cook at both Tresca and Via Matta. He later returned to Baton Rouge, for the opening of Stroubes Chophouse where he was the Executive Chef.
In 2010, Ferguson was approached by Superior Restaurant Group with an offer to assist with opening Superior Seafood New Orleans, in the role of Executive Chef. Ferguson later moved on to the Roosevelt Hotel a Waldorf Astoria Property in New Orleans, where he was the Chef de Cuisine of the Hotel, Teddy's Cafe, Sazerac Bar, and the Fountain Lounge.
Ferguson most recently worked in Chicago as the Corporate Executive Chef at Ideology Entertainment, where he assisted in opening four concepts and directed the culinary teams at five restaurants: Blue Door Farm Stand, Blue Door Too, Chicago q, Blue Door Kitchen and Garden, and La Storia Restaurante. He had the pleasure of working alongside celebrity chef, Art Smith in the development of Blue Door Kitchen and Garden and also worked with Pitmaster, Lee Ann Whippen during her time at Chicago q.
He has since returned to Baton Rouge and in June 2017 opened BRQ, which is a Southern Seafood and Barbeque restaurant that is currently receiving rave reviews. He has partnered with the owners of LCI and is the Chef/Owner of this concept.
Recent Awards and Honors: Chicago Magazines Top 50 Restaurants (2014- Blue Door Farm Stand), "La Storia" Most Anticipated Restaurant Opening (Chicago Magazine and Chicago Tribune), Recipient of Louisiana Cookin' Magazine's "Chefs to Watch Award 2010, and First Place in Southern Breeze Magazine's "Top Chef Competition" 2008.