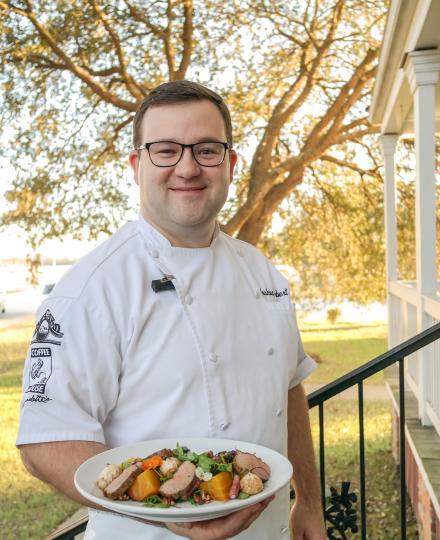 Chef Joshua Hebert hails from the banks of Bayou Lafourche and splits his time between Napoleonville and Pierre Part. After high school, Joshua set out to LSU to study Business and Music Education, an unlikely start for a chef. While attending LSU he enjoyed cooking for his friends, relying on the lessons he learned in his mother’s and grandparents’ kitchens. “Potlicker” was his nickname back then because he was frequently caught dipping a spoon into a pot on the stove.
Joshua’s cooking career started with a private dinner at the request of a college friend’s parents to cook at their home. He was then referred to their friends and family and began getting requests by word of mouth. He decided to make it official after the workload increased and incorporated as Bearfoot Culinary Services. He offered personal chef services, cooking classes, and small catered events. He also taught classes in a locally-owned kitchen store and did cooking demos and community events around Baton Rouge to promote his business venture.
Throughout the years of operating his personal company, Joshua also worked in numerous restaurants. From his first college job at quick-service restaurant Raising Cane’s too casual concepts, steakhouses, and private clubs, Joshua has gained a wealth of knowledge in the food and beverage industry. He has worked in all positions, from dishwasher and server to Executive Chef and General Manager.
Joshua married his wonderful wife Jamie in May 2012. Although they grew up together, they were not exactly sweethearts. When their paths crossed again in college, Jamie accepted a date withJoshua on a whim. Things worked out and love grew. The two best friends welcomed their first child, Jackson Paul, in March of 2014 and their second, James Cullen, in March of 2017.
When Joshua is not in the kitchen, he enjoys spending time with his family and animals, playing tennis, and traveling. Southern hospitality is in his blood, and he loves to shoot the breeze and pass the time with great friends, loving family, and, of course, great food!
Joshua is currently the General Manager and Executive Chef of The Cabin Restaurant and Events and Bernadette’s Table in Gonzales, Louisiana and The Coffee House at The Cajun Village in Sorrento, Louisiana. He has also transformed his personal company into a restaurant and hospitality consulting firm that serves clients across the United States and invests in existing establishments, startups, and various culinary educational programs in Louisiana and across the United States.
Joshua is a recipient of the 2018 Small Town Chefs Award by Country Roads Magazine.