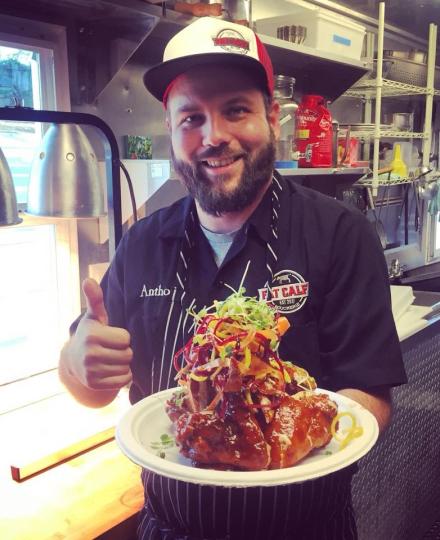 Anthony Felan of Shreveport, Louisiana is a graduate of Le Cordon Bleu College of Culinary Arts in San Francisco where he began his journey in the culinary world. His experience cooking in some of the Bay Area's prestigious restaurants, as well as his childhood memories of working and playing in his grandfather's garden, instilled in him a deep respect for farm-fresh ingredients. His love for Louisiana and his family brought him back home in 2010, where he joined the team of Wine Country Bistro and quickly moved up to Executive Chef. After years with Wine Country, Anthony's drive for something of his own and his passion for farm-to-table led to an unsuspected partnership--and his first business endeavor--with Smith Family Farms in 2017. This partnership spawned Fat Calf Boucherie- a stationary food trailer at Red River Brewing Company, serving Smith Family's beef and lamb and many other locally sourced items. His popular food trailer concept evolved quickly from a 10-item menu, parked outside the building, to a move of the 40ft. trailer inside the brewery and an expansion to a gastro-pub concept with a full menu of shareable and small plates, burgers, and sandwiches. He has the most fun though with his occasional Gulf oyster and crawfish nights on the patio.
In addition to his new restaurant, Anthony and his wife have a side project, 2nd Act Supper Club, where they host underground dinners in various historic locations around downtown Shreveport. The supper club has developed quite the following, typically selling out the 50-60 available seats within 24 hours of tickets posting. These dinners are where Anthony really gets to let his creative juices flow, often pushing diners to try things out of their comfort zone. Anthony has received several awards in NWLA over the years, and in 2015, he was recognized as one of ACFNO's Best Chefs of Louisiana. He has competed in the Louisiana Seafood Cook-off a few times over the last 6 years, but after coming in 2nd place last year, he felt the need to return one final time to shoot for the crown.