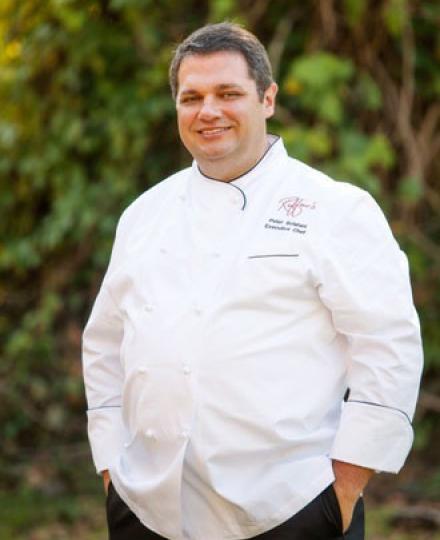 Peter Sclafani, a third-generation chef from New Orleans, is widely regarded as one of the finest and most innovative chefs in Louisiana, if not the entire country.
The co-owner and Executive Chef of Ruffino’s, the premier Italian-Creole fusion restaurant in Baton Rouge, and its sister restaurant in Lafayette, Ruffino’s on the River, Sclafani was named “Jamie Shannon Outstanding Chef in 2015” by the Louisiana Hospitality Foundation.  In 2014, he and his partner, Ruffin Rodrigue, were named “Restaurateurs of the Year” in Louisiana by the LRA.  He was also awarded “Restaurateur of the Year” by Baton Rouge chapter of the Louisiana Restaurant Association for an unprecedented two consecutive years (2010, 2011).  In recognizing Sclafani, the LRA cited his selfless contributions to the advancement of both the local and state hospitality industry, and his role as a leader in the culinary field.  He was named Baton Rouge’s Chef of the Year in 2004 and the city’s Marketer of the Year in 2011.
Chef Sclafani released his first cookbook, “Seasons of Louisiana”, in late 2013 to rave reviews.  That book is now in it’s second printing and he is working on his next cookbook.  Chef Peter appears weekly on “Out da Bayou” television program with John Jackson which shows regionally on Cox Sports TV and nationally on The Sportsman Channel.  He also appears bi-weekly on FLFY-TV Channel 10 morning news show “Passe Partout” in Lafayette.
Chef Peter won two Fleur de Lis Culinary Awards gold medals at the prestigious 2012 New Orleans Wine & Food Experience, after scoring a gold and silver at the 2011 event.  Ruffino’s was the only restaurant from Baton Rouge to receive such an honor.
Chef Peter’s culinary skills have earned accolades well beyond Louisiana as well.  He won the Sterling Silver Premium Meats “Top Chef” Award in Banff, Canada.  He has been invited to showcase the best of Louisiana cuisine at the world-renowned James Beard House in New York City in both 2013 and 2014. He has cooked at the National Restaurant Association’s Public Affairs Conference in Washington, D.C., and been asked to prepare his signature Italian-Creole specialties at the Washington D.C. Mardi Gras Ball for the past two years.
Kirk Herbstreit, Emmy Award-winning college football analyst and anchor, named Ruffino’s Restaurant the “Best Restaurant in the Country” on ESPN’s annual “Herbie Awards.”
Chef Peter serves on the Board of Directors of the Louisiana Restaurant Association, is Past-President of the Baton Rouge chapter of the Louisiana Restaurant Association, and is a Board member and Treasurer of the LRA Education Foundation.   He also serves on the Louisiana Seafood Promotion and Marketing Board, the Advisory Board of the Chef John Folse Culinary Institute at Nichols State University, and is Past-President of the Baton Rouge Epicurean Society.
After taking over full ownership of Ruffino’s from the TJ Moran Restaurant Group in 2009, Sclafani and Rodrigue have relentlessly poured their hearts and souls into both their restaurant and the burgeoning Baton Rouge dining industry.  The partners, and fellow LSU graduates, believe their city should no longer be overshadowed by their higher-profile counterparts in New Orleans.
Along the way, Ruffino’s has fostered a closer connection between their customers and their food.  The Ruffino’s experience is no longer constrained by the walls of its restaurants.  Customers may now purchase Ruffino’s handcrafted Sensation Salad Dressings, its signature extra virgin olive oils and its own private-label Cabernet Sauvignon, “Passion”.
In early 2014, Ruffino’s co-owners opened a new catering and banquet operation in De La Ronde Hall in downtown Baton Rouge, and relocated their headquarters operations there. The partners have signaled their willingness to invest in the revitalization of the downtown area, and have challenged fellow business owners to follow their lead.
Ruffino’s is distinguished by the collective passion of its owners.  A passion for inspired, award-winning cuisine, driven by Chef Peter.  And a complementary passion for extraordinary customer service delivered in a warm, friendly and elegant ambiance, meticulously managed by Rodrigue. One step inside their restaurants, and that passion is evident.  It runs throughout their food, their wine and their culture.  It’s a passion that is drawing new attention to, and a new appreciation for, fine dining in Baton Rouge and Lafayette.