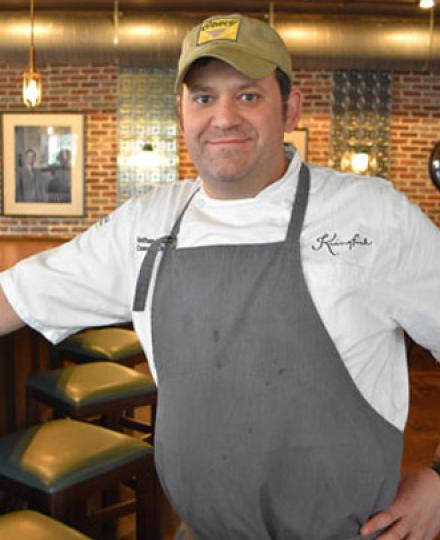 Nathan Richard is the Executive Chef of Kingfish Kitchen & Cocktails. Originally from Thibodaux, Louisiana, a small town southwest of New Orleans, Nathan’s passion for food came from helping his grandfather raise livestock and vegetables, and cooking authentic Cajun dishes with his father. When Richard wasn't cooking, he could be found hunting, fishing, or enjoying the splendors of the region.
After graduation, he took a job at Commander's Palace and subsequently decided to enroll in culinary school at Delgado Community College. He worked as pastry chef, sous chef, and butcher at Commander's for more than five years before moving on to cook in the U.S. and British Virgin Islands. He studied charcuterie in France and Italy under the supervision of some of the best butchers in Europe. With international experience in hand he returned stateside to work at Fig, McCrady's, Husk, and High Cotton in South Carolina. There he became well-known for his inventive bourbon, bacon, and lard desserts.
Richard could not stay away from Louisiana forever and soon returned home and moved to the heart of Cajun country where he fine-tuned his sausage-making and charcuterie skills at Cochon Lafayette. He translated his wealth of knowledge from working with James Beard award-winning chefs like Tory McPhail, Sean Brock, Mike Lata and Donald Link into a career as a full-time butcher at Restaurant R'evolution before joining the Creole Cuisine Restaurant Concepts. His first duty was to help reopen Bombay Club & Martini Bar following a beautiful renovation. Today, Richard leads the kitchen at Kingfish, where his passion for Louisiana specialties—tasso, andouille, boudin—can be seen on the menu.