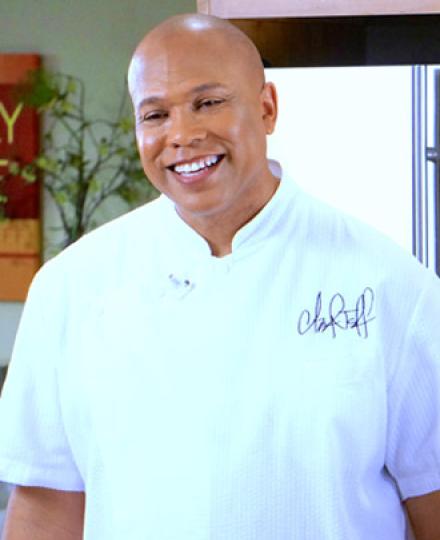 Chef Jeff Henderson rose from humble beginnings in Los Angeles to become the first African-American executive chef at the Bellagio Hotel. He has gone on to become a successful TV host with a cable show on the Food Network, a nationally syndicated series called, Family Style with Chef Jeff and the host of Flip My Food. When he isn’t cooking on TV he’s a highly sought-after motivational speaker, sharing the secrets of realizing your potential at schools, organizations, and Fortune 500 companies across the country.
The American Tasting Institute named him Las Vegas Chef of the Year in 2001.
HarperCollins published his life story in the New York Times best selling book “Cooked”. His success as an author landed him on Oprah. Shortly after that TV appearance, Sony Pictures bought the rights to his book and his life story, which is currently being developed into a major motion picture.
Jeff has taken advantage of his exposure to inspire disadvantaged young adults and at-risk youth. In addition to his high profile speaking engagements, he makes regular appearances at prisons and inner-city youth programs all around the United States.
Today Jeff shares his knowledge and excitement for food through his speaking career, his cooking shows and his popular cookbooks. His story has been featured on Good Morning America, The Today Show, CNN, ABC World News Tonight, The Steve Harvey Show, USA Today, People Magazine, New York Times, Newsweek, and the Washington Post.
Jeff currently resides in Las Vegas where he spends as much quality time as possible with his wife Stacy and their five children.