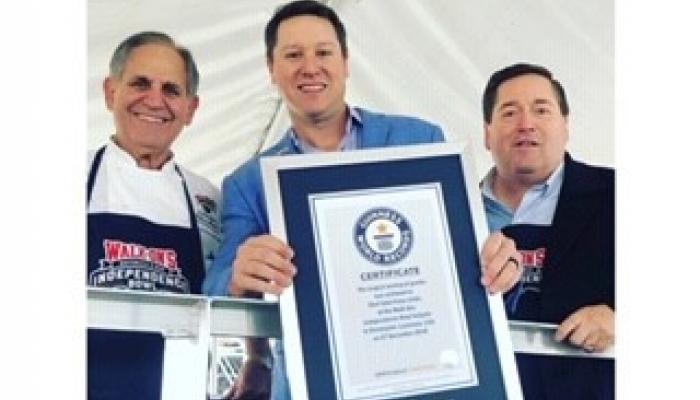 Lieutenant Governor Billy Nungesser, with the help of the Louisiana Seafood Promotion and Marketing Board, are proud to announce the new Guinness World Record for the largest gumbo ever cooked has been set by Chef John Folse and Walk-On’s leading up to the Walk-On’s Independence Bowl in Shreveport.

“Gumbo is one of our signature dishes here in Louisiana, and we have some of the best seafood in the entire world along our coast and in our waterways,” said Lt. Governor Nungesser. “There is no better way to feed the souls who come here than by showing off this signature dish and cooking a world record gumbo. And the best part is we are supporting our nation’s veterans at the same time.”

The team cooked 6,800 pounds of seafood gumbo during the game with bowls sold for five dollars. Proceeds will go to the Fisher House Foundation to provide housing for military families of patients in military and VA medical centers. The gumbo included 983 pounds of shrimp, 590 pounds of catfish, 299 pounds of crab, 262 pounds of alligator, 33 pounds of crawfish, and 111 pounds of oyster in addition to rice as well as spices and broth. The pot alone was 1,068 gallons and stainless steel, which also set a new world record for the largest cooking pot ever made, and produced an estimated 11,000 bowls of gumbo at $5 a bowl for an estimated more than $50,000 donation to Fisher House.

Chef Folse cooked a record 4,000 pound pot of gumbo in 2011. The most recent world record gumbo was 5,800 pounds and was set in 2015 as a part of the Major League Eaters’ World Record Gumbo Eating Competition in Larose. The gumbo consisted of 1,500 pounds of shrimp, 500 pounds of crab and 40 gallons of oysters.