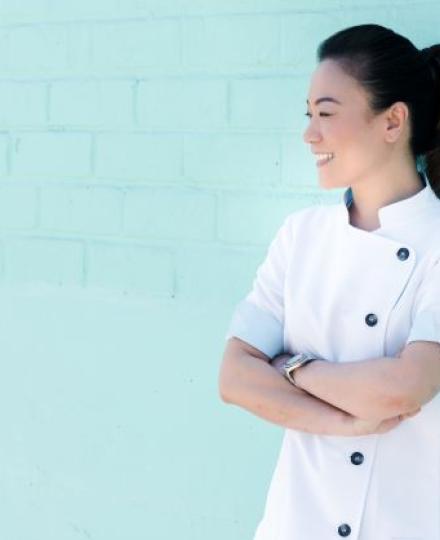 A native of Beijing, and a proud Chinese-American, Chef Shirley Chung of Ms Chi Cafe brings a playfulness and refinement of flavors to her culinary creations. Shirley immigrated to America at age 17 for college and worked in Silicon Valley before following her passion for food. She attended the California Culinary Academy San Francisco and was trained in classic French, Italian, Latin and Chinese cuisines working with Thomas Keller at Bouchon, Guy Savoy, Mario Batali at Carnevino, and Jose Andres at China Poblano. In 2013, Shirley was a chef contestant on Bravo’s Top Chef series Season 11 New Orleans where she finished in the Top 3 and was invited to compete again in 2016 on Top Chef Season 14 Charleston where she was awarded as the runner up. In 2022, Shirley was a chef competitor on Guy Fieri’s Tournament of Champions on the Food Network. In a partnership with her husband Jimmy Lee, Shirley showcases her Chinese heritage, signature dumplings and progressive Chinese-American cuisine at Ms Chi Cafe in Culver City, CA and on Goldbelly.com. She also served as the inaugural chef of Abernethy’s, a new restaurant concept and chef-driven project at the Music Center in downtown Los Angeles. And recently, Shirley, and her colleagues, launched Dumpling Mafia NFT which is the first chef driven NFT on the market, connecting her passions, food and innovations, and building communities bridging food, art and the crypto world.
Shirley’s additional TV appearances include: serving as a judge and mentor on Top Chef Amateurs; a judge on Top Chef Family Style; a judge on FOX’s Hell’s Kitchen; and guest chef appearances on the TODAY Show, the Good Dish, Hallmark’s Home & Family Show, Tastemade’s Make This Tonight, Food Network’s The Globe, Food Network’s Big Food Bucket List, Pickler & Ben, The Steve Harvey Show, and more.