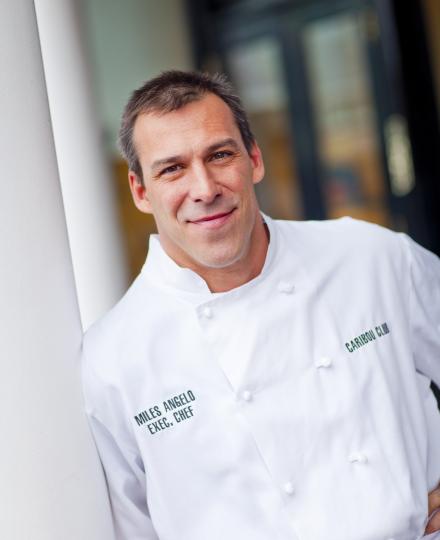 Executive Chef, Miles Angelo creates a seasonal menu of modern American cuisine by blending several global techniques with the fare of North America. Flavors from Europe to South America are combined with classic, indigenous American ingredients to create a perfectly balanced celebration of tastes and textures.
“Cooking is one of my fondest childhood memories” says Angelo. Originally from Rome, Nework, Angelo was raised an avid sportsman who hunted and fished often with his father and friends. They grew fresh fruits and vegetables and gathered wild mushrooms and herbs. “I was raised in an environment where we rarely went to the grocery store. We harvested our food and prepared it in a very natural fashion.” After studding science and art at college, Angelo moved to southern California and worked as a commercial diver and underwater welder. After experiencing the extreme dangers of his new profession, he decided to make his lifelong love of food his vocation.
After several cooking jobs in the South Bay region of Southern California, Angelo gained local acclaim when, as Executive Chef, he opened North Beach Bar and Grill in Venice in 1990, named by Ruth Reichl, then Los Angeles Times critic, as one of the “hottest 10 restaurants in L.A.”. Four years later, Angelo left to work as Chef de Cuisine at Abiquiu in Santa Monica. Under the tutelage of John Rivera Sedlar, “the father of modern Southwestern cuisine” he learned the culinary history and traditions of the Southwest. Angelo returned East in 1995 to cook his unique and exciting version of modern Southwestern cuisine at Arizona 206 and Café, Manhattan’s premiere Southwestern restaurant. Angelo forged a following by dazzling adventurous diners with signature items such as Ostrich carpaccio and lobster tamale. New York Magazine critic Gael Green calls Angelo “a driven poet, cooking as if he had inhabited Frida Kahlo’s inner eye.” James Beard Foundation nominated Angelo for “Rising Star Chef”, NYC 1996.
Angelo came to Aspen in 1997 to take over the stoves at the world famous and exclusive Caribou Club, where he has developed an elite following by incorporating fresh mountain ingredients into his repertoire of contemporary American creations. During his tenure he founded Caribou Catering privately serving the rich and famous of the world. Esquire magazine food critic John Mariani has ranked Angelo “…with the nation’s best chefs”, raving over “…his talent for beautifully conceived and impeccably balanced dishes”.