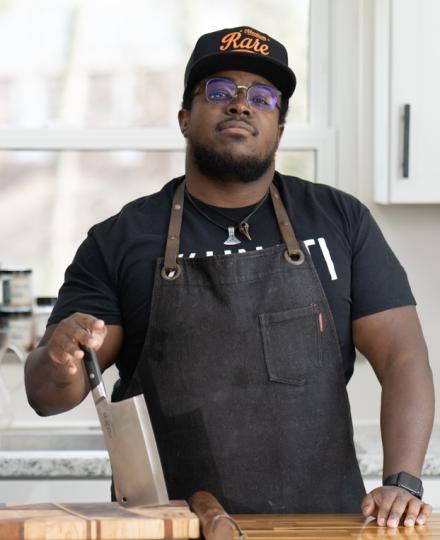 Christian Gill commenced his culinary journey in his grandmother’s Kentucky kitchen at the tender age of seven. Executing his knowledge and passion for flavor through various culinary opportunities, including Walt Disney World, led to his debut Executive Chef role at the Cincinnati Art Museum and curator of Rhinegeist Brewery’s Chef recipes.
In 2018, Chef Christian and PJ Neumann opened Boomtown Biscuits and Whiskey, elevating the essence of comfort food, and delivering culinary gold while spotlighting Christian’s grandmother’s biscuit recipe. In 2019, Chef Christian was named one of the top 6 chefs in Cincinnati, and Boomtown was named the 2019 Cincinnati Best New Restaurant by City Beat.
Destined for a bigger stage with his larger-than-life personality and culinary prowess, Christian competed in the 2017 series Guy’s Big Project, making it to the final four. He was quickly invited back in 2018 to compete in Guy’s Grocery Games, winning the top prize. In 2019, Christian proved his culinary proficiency on Ultimate Thanksgiving Challenge, claiming victory again. The closing of Boomtown in 2022 had Christian down but not out. He channeled his trial by fire energy to take on his greatest challenger yet: Bobby Flay. Chef Christian came out triumphant on Beat Bobby Flay. He is currently dominating the airwaves on Guy’s Grocery Games: Summer Games, a tournament of previous Grocery Game winners.
Viewers cannot get enough of this lively chef, so the future will hold an abundance of new opportunities to showcase his culinary flair and brilliance.