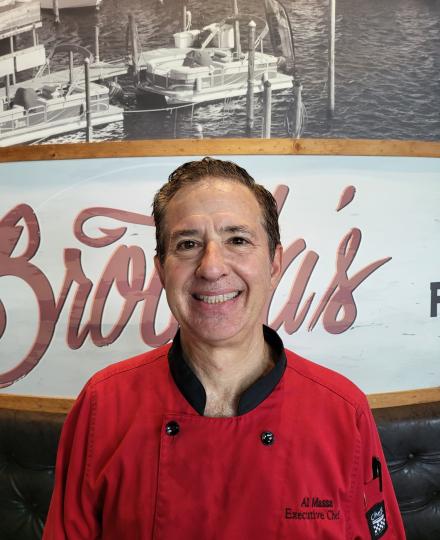 Chef Al Massa grew up in an Italian family where food was an important part of life, showcased at many traditional family events. Al initially got his sense of culinary adventure from his mother, pitching in to help with dinner parties, gaining an appreciation for simple delicious food, and learning a thing or two in the process. Following a ten-year career as an officer in the United States Air Force, he decided to pursue what had previously been a hobby with dedication and zeal. With his wife Karen's support and encouragement, he enrolled at Johnson and Wales University in Charleston, South Carolina and finished the two-year course in a year and a half.
Wanting to learn the fundamentals of Creole Cuisine, Chef Al moved his family to uptown New Orleans where he secured a position as an entry-level line cook at Emeril Lagasse's NOLA. Chef Al's abilities became readily apparent as he progressed from desserts to the hot line, saucier, and finally Sous Chef, all within his first three years of employment. After spending two more years as a Sous Chef at NOLA, Chef Al joined the team at Emeril's Delmonico, where he rose to Executive Sous Chef. During his ten years with Emeril's organization, Chef Al absorbed the intricacies of Creole cooking, recognized the importance of using local ingredients, and mastered a style of cuisine that is ingredient-driven. Wanting to expand his experience, Al signed on as the Corporate Chef for a New Orleans restaurant group and their four properties, opened a restaurant in Lafayette, Louisiana, and then spent five years as the chef at Michael's on East in Sarasota, Florida. His experience at Michael’s on East was gratifying as Nation's Restaurants News inducted them into their Fine Dining Hall of Fame as one of only ten restaurants selected nationwide. During his tenure with Michael’s he won the Edible Sarasota Local Hero award for "Favorite Chef."
Chef Al eventually returned to Destin, Florida and worked at Marina Café for four years, winning VIP Destin Magazine's Best Fine Dining in Destin for 2017. Currently, he is the executive chef at Brotula's Seafood House and Steamer, where he won VIP Destin Magazine's Best Chef for 2021, has propelled the restaurant to a number one rating on Trip Advisor and recently winning the Emerald Coast Open Lionfish Competition. When not in the kitchen, Al enjoys spending time with his wife Karen and daughter Cara and tries to fish as much as possible.