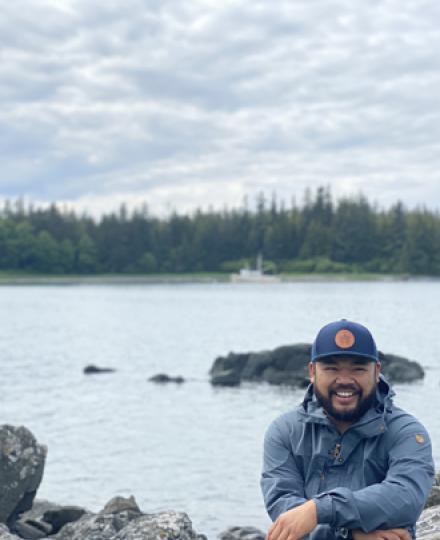 Lionel Uddipa is the owner of Red Spruce Eatery and former executive chef and partner of Salt Restaurant in Juneau, Alaska. Uppida opened Red Spruce in January of 2020 with a concept of global street food. With the global pandemic happening, Uppida had to switch gears into a more approachable-comfort food concept.
During his time with Salt, the restaurant received awards including Best Restaurant by the Reader’s Choice Awards, first place at Bacon Fest and second place at the Great Alaska Cook-Off. His award-winning dishes were featured in the New York Times. Uppida was crowned “King of American Seafood” in 20??? And landed a show with Chef Gordon Ramsey “Uncharted”.
Uppida started cooking on a professional level 15 years ago. He attended culinary school at Le Cordon Bleu in Atlanta. He then interned at Estancia La Jolla Resort and Spa and the Lodge of Torrey Pines, both in San Diego. After two years, he accepted a position as the Chef de Partie for the Montage Hotel and Resort in Laguna Beach. While at Montage, he worked at the 5-star, 5-diamond restaurant, Studio.
In 2013 I moved to Chicago to go “stage” for a year. Stage is a term used when a cook will work for no salary to learn and advance in his/her career. After working in two kitchens during this year, Uppida returned to Alaska where he was raised since he was two years old. His father was a chef, which is where his love for cooking started. At family gatherings, the focal point was food and plenty of delicious Filipino dishes. These days, when not at Red Spruce, Chef Lionel spends time with his six-year-old daughter, Juniper, doing what they both love – forage and cook together.