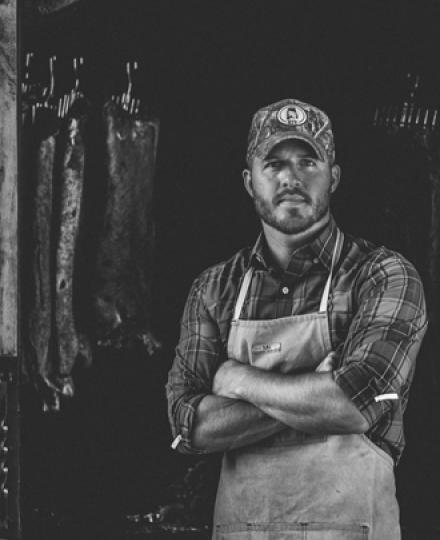 David Bancroft is Executive Chef/Partner of Acre Restaurant and Bow & Arrow BBQ in Auburn, Alabama. Acre opened in August 2013, a joint venture with family and close friends. Bow & Arrow opened in November 2018. Born in Alabama but raised in San Antonio, Texas, David’s passion for cooking began at an early age, smoking brisket and making BBQ. David returned to his Alabama roots to attend Auburn University’s School of Business. After being selected as “kitchen steward” for his fraternity, he was inspired and ready to begin his culinary career in the restaurant industry. David is a self-taught chef, farmer and forager who showcases the sustainable ingredients provided by local farmers and fisherman in Alabama. He also tends to three on-site gardens, reinterpreting the rich heritage of Alabama cuisine. Acre is wrapped in edible landscapes designed to provide fresh seasonal harvest used to create delicious offerings which change daily, depending on what is ready on the urban farm. Bow & Arrow is a not so subtle nod to his upbringing in Texas, featuring smoked meats and a potluck of southern sides.
His commitment to the Alabama farming community have earned him recognition on local, regional and national platforms- most recently, as a competitor and winner on the Food Network show “Iron Chef Showdown”. His cuisine has also been featured in Garden & Gun, Southern Living, Taste of the South and on ESPN, USA Today, CNN.com and many more. He was named “2014 Chef of the Year” and “2016 Restaurateur of the Year” by the Alabama Restaurant Hospitality Alliance. In 2019 he received his fourth nomination from the James Beard Foundation for “Best Chef: South”.
To further his philanthropic contributions, David founded, planned and executed the “Alabama Oyster Social”, whose primary goal was to raise funds for Alabama oyster farmers. The Social has gained invaluable support from nationally recognized chefs and restaurateurs, and raised over $35,000 at its third annual event in 2017. In March of 2019, David’s home of Lee County experienced devastating loss of life from an F5 tornado. He worked with several local and regional chefs to organize a “Bourbon & Beef” dinner that raised $34,000 to assist with the recovery efforts of those affected by the storms.
When David is not cooking, he enjoys hunting and fishing on his family’s farm in LA (Lower Alabama) and spending time with his wife, Christin, son, Walker and daughter, Kennedy.