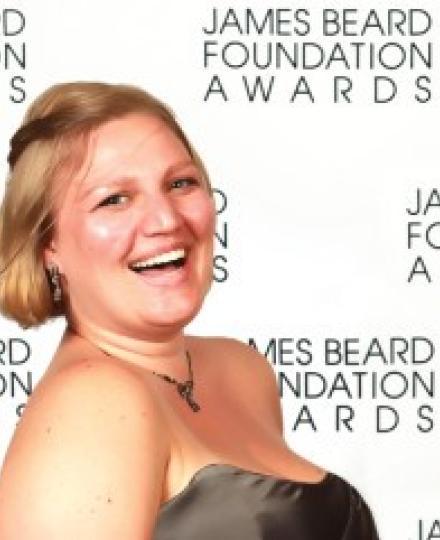 Recently named Director of Sponsor Relations for the James Beard Foundation, Victoria has been a part of the JBF family for more than a decade.  For the past 7 years, as the Director of House Operations and House Events, Victoria maintained the physical upkeep of the James Beard House, a 1800’s era, 4-story brick townhouse in the West Village that James Beard called home the last 15 years of his life.  She worked with many of the chefs who have cooked at the Beard House, planning the logistics for those events and managing the wait staff and porter team.
A graduate of the French Culinary Institute, Victoria completed coursework in viticulture and vinification through the American Sommelier Association and spent the first 15 years of her career in restaurants, working in both front and back of house.  She was the general manager of the E. U. restaurant in the East Village and previously, a floor manager at Jonathan Waxman’s Barbuto.
She has represented the Foundation at various events around the country including TasteAmerica, and many Friends of James Beard Benefits.  She is also a certified gelato judge, having been party of the technical jury twice in Rimini, Italy for the Gelato World Tour, as well as in Chicago, New York City and Jersey City, NJ.
Victoria is a founding member of the Junior Board of Food and Finance High School, NYC’s only public school with a focus on culinary arts, working to raise money for the Food Education Fund which allows students to further pursue their dreams in culinary school.
She grew up on a farm in Warren County, New Jersey where her father raised pheasants and she had a pony named Macaroni.  She now lives in Jersey City with her husband Robert and can usually be found searching for the world’s best coffee cake recipe, a delicious pursuit indeed.