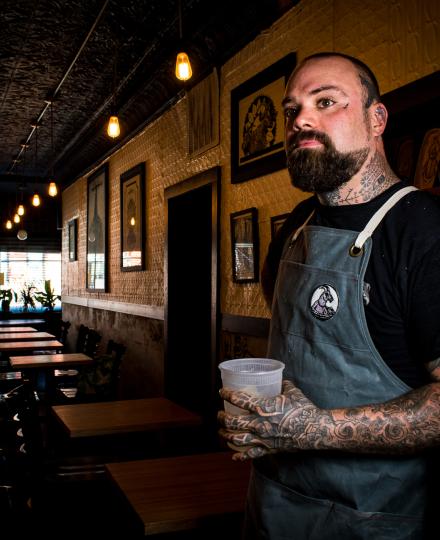 TJ Steele was born into an Italian family in New Jersey where he grew up cooking next to his mother and grandmother. As early as middle school, he preferred the kitchen to the classroom, and started as a dishwasher when he was 12 years old. He has never looked back.
Steele attended The Culinary Institute of America and moved to New York City in 2002. Within three years he was made Executive Sous Chef at Danny Meyer's landmark, award-winning Union Square Cafe. At 25 years old, he was the youngest Executive Sous Chef in the restaurant's history. While at Union Square Cafe, Steele developed lasting relationships with the farmers and purveyors, and learned the art of cooking within the seasons. During this time, he immersed himself in the food scene - whether in the far-flung boroughs of New York City, or in Spain, where he started to make annual pilgrimages to eat.
His first trip to Mexico was as a teenager, but a serendipitous visit in 2006 brought TJ to Oaxaca and changed his trajectory. He fell in love with the country, its culture and its cuisine. He first immersed himself through mezcal, working with the locally based Jimenez family and their farms to bring handmade, affordable product to New York City. He founded El Buho Mezcal and eleven years later, it is available in over 20 states, internationally, and still growing.
He continued to visit and work in Oaxaca for many years until joining acclaimed tapas restaurant, Tia Pol in 2010. After a two-year stint as Kitchen Manager, Steele's attention once again turned towards Mexico. He left Tia Pol in 2012 and went back to Oaxaca, setting up a residence there to study, eat, and travel in the hopes of marrying his love of seasonal, farm-to-table cooking, with his love of Mexican gastronomy.
In the summer of 2017, he opened Claro, a Oaxacan influenced restaurant in Gowanus, Brooklyn with an emphasis on seasonal cooking around corn, barbacoa, consommé and mezcal. The restaurant reflects Steele’s time spent in Oaxaca and the community of craftsmen, cooks, farmers and neighbors that have become family to him over the past dozen years.
At the restaurant, Steele is dedicated to making everything by hand, including the cheeses, chorizo and moles and of course, masa. He is planting corn on his land in Oaxaca as well as working directly with Oaxacan farmers to source and import non-GMO heirloom corn.
Since opening, Steele has been awarded a Michelin Star for Claro, named StarChefs Rising Star Chef and the reader’s choice winner for Eater Chef of the Year as well as  Chef to Watch by Plate Magazine. He was a featured subject in a documentary on the history of food and led Claro to a two-star review and top 10 restaurant of the year from The New York Times. He continues to source the mezcals for El Buho and his palate remains the standard for the brand.