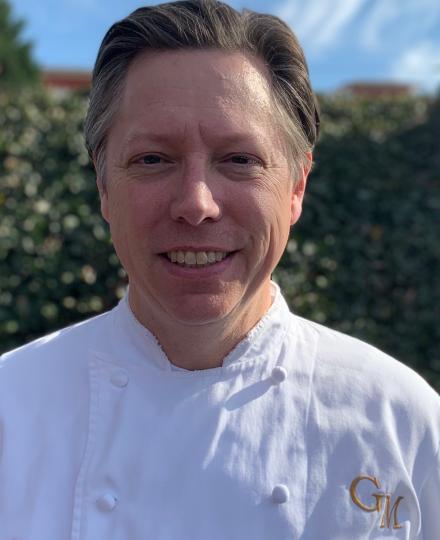 Atlanta favorite, Gary Mennie has received critical acclaim for his signature progressive American cuisine. Born and raised in the heartland of Pennsylvania, Mennie is a graduate of the Culinary Institute of America in Hyde Park, NY. While in school, he gained classical training and real world experience working under French Master Chef Maxime Ribera at Maxime’s in New York City. Upon graduation, Mennie set his sights West and continued to expand upon his training working alongside French Master Chef Jean Francois Metinger at the Mobil Five Star L’Orangerie in West Hollywood, CA.
Seeking to broaden his horizons, Mennie took a different culinary direction and signed on at the iconic Spago, working under celebrity chef Wolfgang Puck. This life-altering experience laid the groundwork for his signature gastronomic style. Using a wood burning oven and grill opened his mind up to a whole new set of culinary rules. He learned the principles of California cuisine, which drew from the purity of Italian cooking fundamentals. Utilizing local and regional products and simple preparations, he mastered the farm-to-table philosophy we know today.
A fateful move to Atlanta brought Mennie to the kitchen of Gunter Seeger at the Mobil Five Star Dining Room at the Ritz-Carlton Buckhead where he continued to refine his culinary style. His true Atlanta debut came in 1995 when Mennie was hand-picked by fellow Atlanta visionary, Chef Gerry Klaskala, to lead the opening culinary team at Canoe. Mennie’s performance here garnered a Mobil Four Star rating, and he was one of the youngest chefs in America to receive this award. Following his ten year tenure at Canoe, Mennie opened his first solo venture, Taurus Restaurant, a new American chophouse that exemplified his trademark style of big, bold flavors in the use of whole roasted meats on the bone set in a cozy, supper-club like arena.
Following the unfortunate closing of Taurus, Mennie partnered with the Puccini Group out of San Francisco to develop the rebranding of the Georgian Terrace Hotel in Midtown Atlanta. As Executive Chef, he managed all aspects of the hotel food & beverage, including Livingston Restaurant and Bar. Here his progressive American cuisine serves as the backbone of the restaurant which pays respect to the Atlanta of yesterday and today. Mennie prepared straightforward, yet refined American classics while keeping modern, fresh sensibilities in mind.
Chef Mennie relocated to the up and coming city of Greenville, SC. Here he partnered with Maverick Southern Kitchens Eponymous Restaurant, High Cotton. There he prepared inspired and refined American classics while keeping modern, fresh sensibilities in mind. He continues to draw inspiration from his passions for fresh ingredients and fine dining which were cultivated at an early age.
Chef Mennie returned to Atlanta with the contract food service company Compass. He managed several different dining units and a large catering company that featured the Georgia State Capitol and the Georgia Freight Depot. He was recognized for his leadership efforts with best “General Manager in the South” Awards and “Account of the Year” awards as well.
Most recently, Mennie was named Director of Catering & Culinary Operations at il Giallo Osteria & Bar, one of Atlanta’s most distinguished Italian restaurants. At il Giallo, Chef Mennie spearheaded several menu changes and as overseen the restaurant’s growing catering division.  His creativity working alongside Chef Jamie Adams has been a driving force at the restaurant.