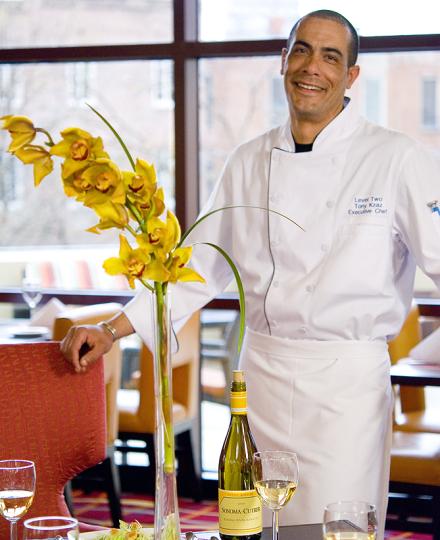 Inspired by his Cousin, a San Francisco Chef, Tony began his passion for cooking at the early age of sixteen. Within two years he was the Executive Chef for a busy seafood restaurant in Madeira Beach, Fl.
With a drive to self educate and experience more, Tony moved back to San Francisco and began working for top Chefs, such as George Marron, (Fifth Floor, Aqua) and Michael Mina (at his signature restaurant in the Westin St. Francis Hotel).
A defining moment happened which changed Tony’s direction and passion when he first experienced Peruvian food. At the first taste, he was determined to learn this new cuisine. The flavor profiles were like nothing he had experienced before. This drove him to self -train and become a Peruvian Chef at one of the top rated Peruvian restaurants in San Francisco. He then expanded his responsibilities as a Corporate Chef overseeing five restaurants in this group.
Tony excelled at high volume and large scale banquets, which made him an ideal candidate for the Executive Sous Chef position at the 85,000 sq. ft banquet space at the Oakland Marriott Convention Center and Hotel. In this position he transformed the hotel’s restaurant into one of the area’s only gluten free restaurants. He was reviewed and applauded by fearlessdining.com.
After four years, Tony was ready for the Executive Chef position at the 250,000 sq. ft Myrtle Beach Convention Center, Sheraton Hotel. In this position he has achieved 1st Place winner People’s Choice Award of the Myrtle Beach Trio Dinner Competition 2016, 1st place winner People Choice Award Myrtle Beach Trio Dinner 2017, and 2nd place winner People’s Choice Award Myrtle Beach Trio Dinner 2018. He then won 1st place in the South Carolina Seafood Challenge and is looking forward to competing nationally.