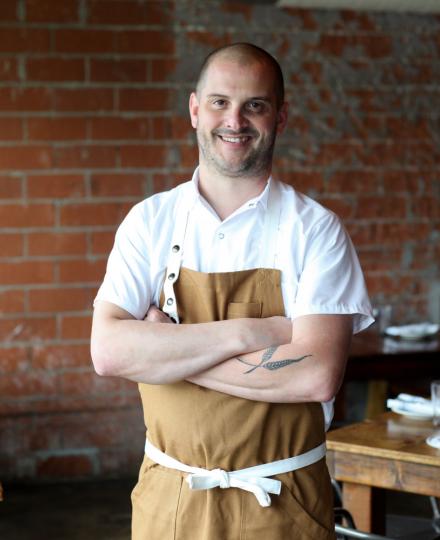 Ryan Lachaine is the co-owner and Executive Chef of Riel. Recognized nationally in publications such as Esquire, Food & Wine, Business Insider and Tasting Table, Lachaine’s palette includes the culinary landscape of Texas’ gulf coast, Lachaine's Ukrainian heritage and his French-Canadian hometown (Manitoba).
One of Houston’s most talked about chefs, Ryan received his Culinary Arts degree from The Art Institute of Houston. He worked at trailblazing Texas restaurants such as Gravitas, Stella Sola, Reef and was inducted into Eater’s 2013 class of Young Guns as the Chef de Cuisine at Underbelly. Lachaine staged at some of the country’s top restaurants, including Husk (Charleston, SC), Herbsaint Restaurant (New Orleans, LA), COI (San Francisco, CA) and Animal (Los Angeles, CA).
In 2016, Ryan took a year off from the kitchen to plan Riel, continuing his culinary travels through the best restaurants in Canada and the United States. Over the past year, Lachaine focused his vision on what Riel would become; an articulation of his culinary point of view.