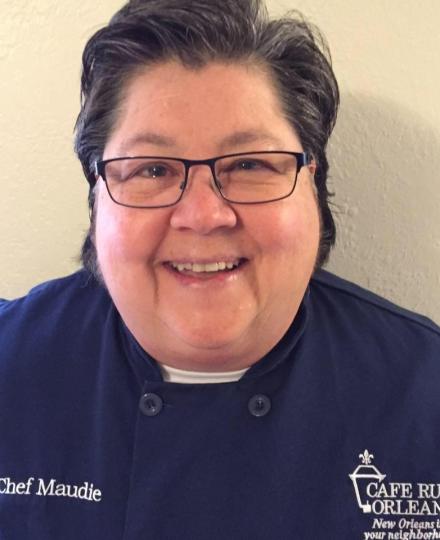 Chef and co-owner of Café Rue Orleans, Maudie Schmitt, has an extensive restaurant heritage.  Grandparents on both sides of her family were restaurant and bar owners in the greater New Orleans area.  Her mother was born on Tchoupitoulas Street in an apartment above the family restaurant in what has been declared by the historic committee as the oldest townhouse in New Orleans.
Maudie learned to cook from the many great chef’s in her own lively family.  She was always encouraged to be creative in the kitchen and has become a true culinary artist.  Some of her favorite memories were made around the family kitchen table, laughing, talking and sharing recipes.  Serving good food to people is Maudie’s way of bringing her family history to your table.
Born and raised in New Orleans, Maudie graduated from St. Charles Borromeo Catholic High School.  She attended Henderson State College in Arkadelphia, Arkansas.  She returned to New Orleans to begin her teaching career, relocated to Lafayette, Louisiana, where she retired from teaching special education for 25 years.
But she never stopped cooking!  She catered special events throughout her teaching career and finally decided to retire from teaching and open a restaurant.  Even though New Orleans is home, she always loved Arkansas and chose to move to Fayetteville for an adventure.  And what an adventure it has been!  Café Rue Orleans opened on January 10, 2001 and has been blessed with much success for 17 years.
Some awards include:·         NWA Times BEST NEW RESTAURANT 2002·         Citiscapes Magazine BEST CAJUN 2004 thru 2017·         NWA Times BEST BRUNCH DESTINATION 2011 thru 2017·         Arkansas Times Finalist BEST SEAFOOD RESTAURANT 2016, 2017·         Arkansas Times Finalist BEST CATFISH RESTAURANT 2016, 2017·         Ozark Iron Chef – AUDIENCE FAVORITE 2005