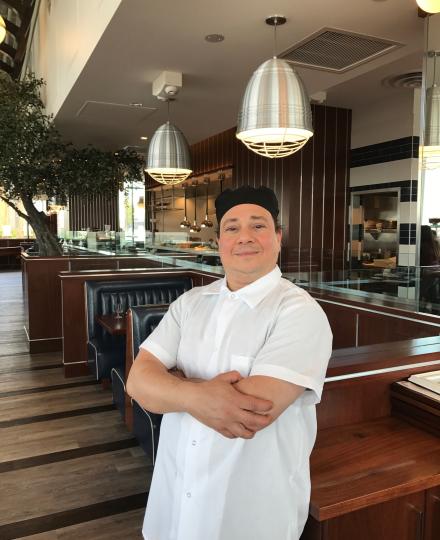 Navy Yard Hospitality Group Culinary Director Marc Orfaly is a seven-time nominated James Beard Awardee, Food & Wine “Best Chef in America” honoree and “One of the Top Chefs to Watch in the Country” by John Mariani of Esquire Magazine and Corby Kummer of Boston Magazine. With over 25 years of culinary experience in some of the most esteemed kitchens in America, Marc is known among his peers for his astute palate, his commitment to authenticity, and his enthusiasm for all things culinary.
Orfaly grew up in Brookline, MA surrounded by music and food. His mother was a piano player, father an audio technician and both Marc and his brother played the drums. Some of his first memories of food stem from Sunday suppers at his Grandmother’s and the savory aroma’s that filled her home.   Marc started cooking at age 15 to earn extra money for drum equipment. What started out as a way to make money evolved into an excitement for the restaurant industry and a passion for food.
After graduating with a culinary degree at Johnson & Wales University in 1990, Marc cut his professional teeth cooking in some of the best kitchens on the East and West coast. He spent the first five years in Boston honing his skills at Olives with Chef Todd English and at Davios restaurant. In 1995, he headed to Los Angeles for three years to work under master chef Joachim Splichal at Patina and with chef-owners Mark Peel and Nancy Silverton at Campanile.  Orfaly then made his way to New York City as a private chef for the Tisch family in addition to positions at NYC Creative Edge Parties and Union Pacific Restaurant. In 1999, he returned to Boston to work with acclaimed chef Barbara Lynch at No. 9 PARK.
Orfaly opened his first restaurant, Pigalle, a sophisticated Parisian bistro with international accents in 2001 to rave reviews. It was awarded one of the "Top 10 New Restaurants" by Food & Wine, “Best New Restaurant in Boston” from Bon Appetit and one of the "Top Restaurants in Boston" by Alison Arnett, former food critic of The Boston Globe.  In addition to Pigalle, Orfaly was Executive Chef at The Beehive focusing on creating and refining their cuisine. Orfaly then opened Marco, an authentic Italian restaurant in Boston’s North End and consulted on numerous projects such as Peking Tom’s, Summer House and Remick’s.
As Culinary Director at Navy Yard Hospitality Group, Orfaly uses his skills, vast experience and passion to enhance the varied dining experience at all three Navy Yard Hospitality Group locations: Pier 6, Mija and their newest restaurant ReelHouse.