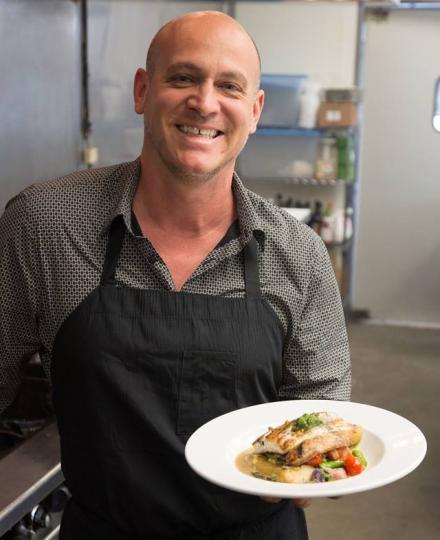 Jeremy Downey is a proud native of the bayou. His hometown is Bayou la Batre, Alabama where his love of seafood began. Downey's first job as a teenager was unloading shrimp boats. This afforded him first-hand experience within the industry that he thrives.
Downey attended the University of Alabama from 1992 to 1996. He played football at Alabama and Gene Stallings' team won the National Championship in 1992 (Yes, Jeremy does wear the ring). He learned the importance of hard work and dedication on the team and earned his bachelor's degree in English.
While in Tuscaloosa, Jeremy began his restaurant career working at The Globe and Kozy's. He worked his way up and worked around the country. His path includes positions at Piatti in California, Zaytinya in D.C., Vidalia also in D.C. and as a private chef in New York. He then decided to grow roots in Birmingham, Alabama. Downey worked under Frank Stitt at Bottega. After that he became head chef of City Hall Diner. Downey then opened his own restaurant, Bistro V, in Vestavia Hills, Alabama, on June 4, 2010. His menu expresse his love of local seafood, produce, and meats. His position conveys his principles of hard work and diligence. His restaurant houses the spirit of celebration and fellowship.