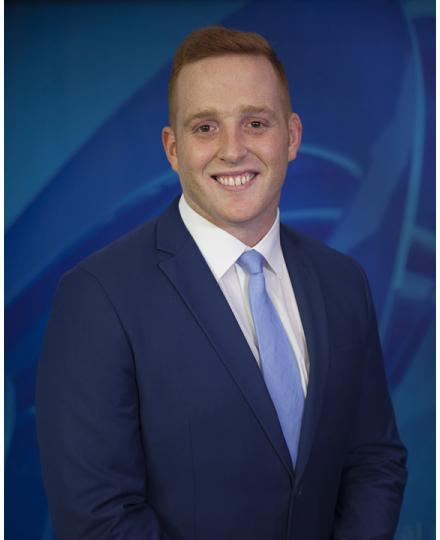 Gerald joined the News 10 Sports team in June of 2014 after spending a year at KALB in Alexandria, Louisiana as the Weekend Sports Anchor. Gerald now works on KLFY News 10's morning show Passe Partout.
In October of 2015, Gerald started a segment that airs every Thursday morning called Acadian Eats. Since then, Gerald has been to more than 125 restaurants in the Acadiana area.
Gruenig graduated from Nicholls State University in the Spring of 2013 with a degree in Broadcast Journalism. While studying at "Harvard on the Bayou", Gruenig was a Team Captain and four year starter at center along the offensive line for the Nicholls State University football team.
In the spring of 2013, Gruenig interned at WDSU in New Orleans where he worked under Sports Anchor Fletcher Mackel.
Gerald was born and raised in New Orleans, Louisiana. His family owns a po-boy restaurant in the Big Easy named "Koz's". The first "Koz's" restaurant opened up in November of 2005 after the Gruenig family lost their home and original restaurant "The Po Boy Bakery" to Hurricane Katrina. Gerald's childhood home was actually located on top of the "The Po Boy Bakery" in Gentilly.
Gruenig blames his loud tone and outgoing personality on his early years spent growing up in the restaurant business.
New Orleans definitely has a special place in Gerald's heart, but he knows first-hand that every region of Louisiana has plenty to offer.
Gerald has spent the last 13 years living in various parts of the state including Covington, Mandeville, Thibodeaux, Alexandria, and now Lafayette. Since moving to Lafayette, Gruenig has completely fallen in love with the area's unique culture. Gruenig lives in Lafayette with his lovely wife Ariel and their two dogs, a boxer named Ripley, and a chihuahua named Tyrone.
So, if you see Gerald out walking the dogs, playing his accordion or enjoying the local food and music scene, feel free to say hello. He is always up for a conversation!