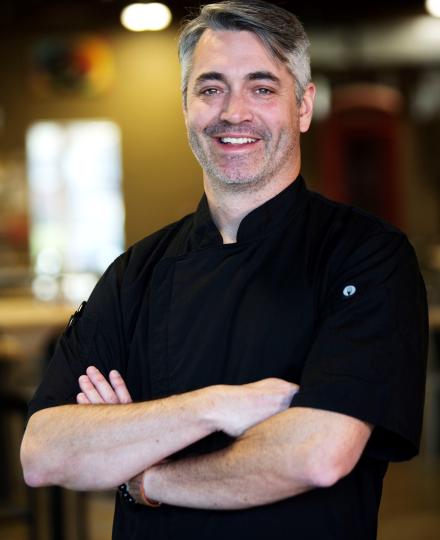 Chef Craig worked his way through college in the back-of-the-house at various restaurants in Pennsylvania and along the eastern seaboard.  After his college graduation, he followed his passions to Portland, Oregon and into the kitchen of Assaggio, an award winning authentic Italian restaurant, where he served as chef de cuisine.  Over the following 20 years, he has excelled in the industry by winning awards and utilizing his experiences from opening and running fourteen kitchens.  His first restaurant and bar, Echo, in Portland was ranked one of Portland’s top 50 restaurants in 04’-05’ and one of its top 10 new bars of 2004.  In 2006, Craig sold Echo to his business partner and relocated to Indiana.
He has had recognition for his work in culinary competitions, industry publications and in the press.  His work has been featured in the “Best of” lists in both Portland and Indianapolis along with regional and national cookbooks.  In 2012-2016 he was named by Top Chef’s of America, Urban Spoons and OpenTable’s -Top 100 lists for Family Friendly Meals and Gluten Free restaurants in the country, Top 10 Cocktails -best of Charcuterie-Top Meals-Hot Spots, Top 25 Restaurants 2011-2016 by Indy Monthly and Eater’s best restaurants in Indiana. In 2013 - 2016 he competed in the World Food Championships placing as high as top first and winning other national and regional competitions across the country.  One of Craig’s restaurants, The Local has also been recognized by national publications for its mission to support local economies, farms, artisans and philanthropy.  He also has appeared in many local and national television and radio shows promoting different charities, restaurants and culinary competitions.
Craig recently sold his shares in Taco Shop, Bent Rail Brewery and the Local Eatery and Pub to open Nesso, Coastal Italian for Cunningham Restaurant Group.  He also was the owner of Ancient Cellars Winery from 2007-2012 when he sold it to his brother to continue their family traditions.