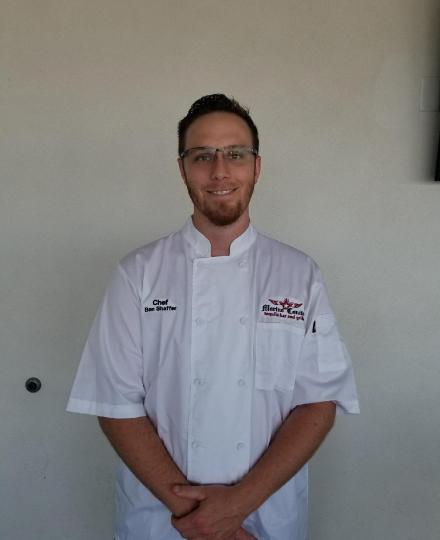 Ben Shaffer is the head chef of Marina Cantina at Clearwater Beach. Ben fell in love with cooking when he would help his mom in the kitchen when little. At age 14, he started as a dishwasher at a small pizza restaurant and quickly moved to lead cook by 16. At age 17, Ben received his first prep job at a local high end establishment, Salt Rock Grill, and quickly moved through the ranks to be one of their lead line cooks.
He got an offer for his first head chef job at 21 and quickly took it. Before that he never thought of himself as a leader but has never looked back. Ben has lived in the beautiful Tampa Bay area his whole life and has enjoyed every minute of it. Being an avid fisherman, Ben appreciates how nice it is to live in one if the fishing capitals of the world. It has also allowed him to cook with some of the highest quality, fresh seafood available from the Gulf of Mexico, which has led to his love of seafood today.