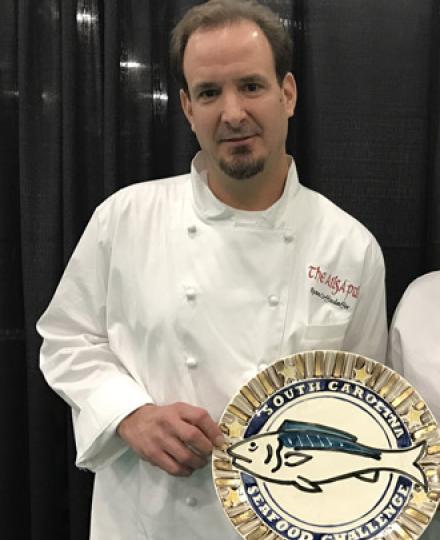 Ryan’s passion for food started while beside his Grandmother and being in the National Guard.
He went onto the Pennsylvania Institute for Culinary Arts and moved to Myrtle Beach following to start his culinary career. He started at the Radisson hotel at that time the only AAA Four-Diamond in Myrtle Beach. and moved onto executive chef at the members club at Grand Dunes.
He continued is culinary career as Chef de Cuisine at the Isle Capri Casino in Blackhawk, CO.
Ryan then returned to his southern roots in Myrtle Beach to serve as the executive Chef at Roy & Sids and Divine Prime where they earned a AAA Four Diamond Award.
Ryan has served as the general manager and Executive Chef at Ailsa Pub in Myrtle Beach for 7 years. The Ailsa Pub has many accolades and is one of the "Top 50 19th Holes" in America by Golf Digest.
Ryan puts his twist on southern barbeque into a well-rounded and tasty menu that includes items from the pubs sustainable garden that is located on the property.
Chef Ryan has won several Medals in the ACF Cooking Competition, he has worked with chefs in military – Training Navy Culinary Staff. Ryan enjoyed visiting the docks of Murrells Inlet for sustainable seafood.