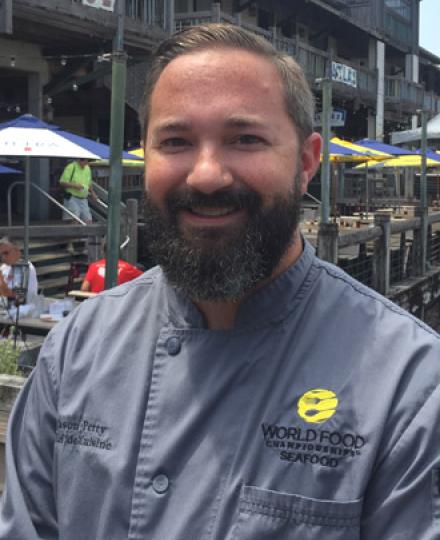 Chef Jason Perry is a native of Georgia, but has called Pensacola, FL his home since 1995.
Jason graduated from J.M. Tate High School in 2004 with a Leadership and Soccer Scholarship to Andrew College. But after a year in Cuthbert, GA, his heart pulled him back to Pensacola and he enrolled in Pensacola Junior College’s Culinary Management Program.
Chef Jason began his tenure at Jackson’s Steakhouse in October of 2006, and his talents quickly propelled him to Chef De Cuisine at the ripe age of twenty-one.
For the past 10 years he has honed his skills through the Great Southern Restaurants kitchens as a Chef de Cuisine at both The Fish House and Jackson’s Steakhouse, both located in Downtown Pensacola.
Additionally, Chef Perry has been a guest chef on Coastal Cooking, presented Chef demonstrstions at the Pensacola Seafood Festival, worked with Chef John Besh at the 2015 WSRE/PBS event dinner, and was voted “Best of the Coast” 2011 runner-up for Best Up-and-Coming Chef. Jason has qualified and competed in the Seafood Category of the 2016 World Food Championships (WFC) held in Orange Beach, Alabama, and has since qualified for 2017 WFC in the Recipe Category after receiving People's Choice at the Grit & Game Wild Game Cook-Off.
Chef Jason enjoys playing soccer, stand-up paddle boarding, golfing, and spending time with his wife Jessie and three beautiful daughters.