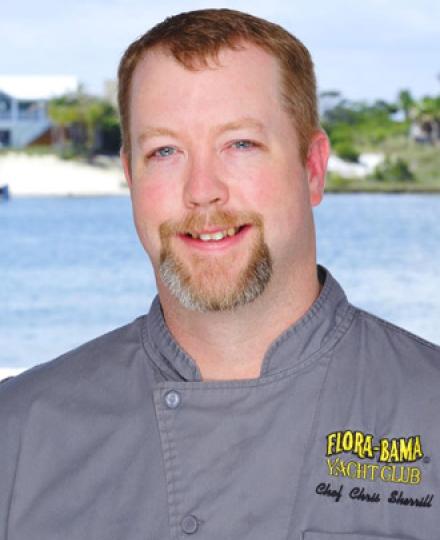 Chef Chris Sherrill was born and raised in Eufaula, Alabama. Chris knew at an early age that he wanted to cook.
All throughout his time in Boy Scouts he honed his campfire and wild game cooking skills. In High School, the urge to cook was overwhelming and the thought of being a professional chef was equally inviting. In 1995 Chris entered The National High School Recipe contest sponsored by Johnson & Wales University. Chris' dish of Fruit Stuffed Quail with Orange Cranberry Sauce was Alabama's winning recipe! It also awarded Chris a scholarship to Johnson & Wales University in Charleston, SC.
During his time at Johnson & Wales Chris gained the knowledge he needed to bring his talents to the table. In addition to being a professional chef and restaurateur, he and his wife Jenny have 4 children. Chris enjoys hunting, fishing, coin collecting and of course being a Father.
Chris was selected to cook for the 2012 Olympics in London where he and a team of chef's from the Gulf Coast brought the rich tradition from that area to London to cook for American Olympians and their families.
In 2015 He represented The Flora-Bama Yacht Club at the World Food Championship where he finished 3rd in the world Accomplishments include winner of the 2012 Alabama Festival of Flavors, 5th annual Hangout Oyster cook off and People’s Choice. 2013, 2014, 2015, 2016 Perdido Key Wine and Arts Festival, AL.com’s top 10 best burger on the island. Eagle Scout class of 1992.
In 2015 he won the Zatarain’s Restaurant Challenge and is currently working on his return showing to World Food Championship in the fall of 2016 Chris has just begun his 4th year at the Flora Bama Yacht Club, in Perdido Key, Fl and is looking at plans for future new concepts.