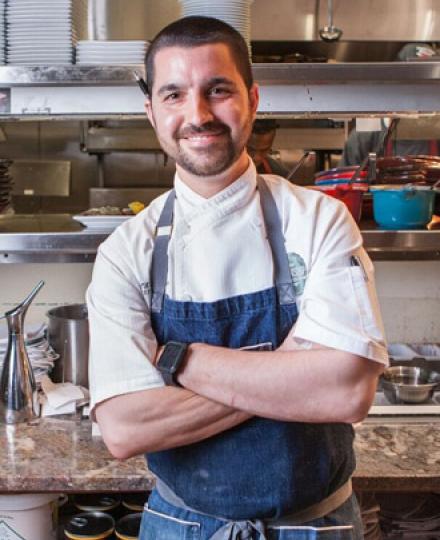 After honing his culinary skills in kitchens across the country, including a position to celebrated chef John Besh in New Orleans,LA., Eaton happily returned home to Jackson, MS to put his heart and soul on the plate.
Born in Jackson, MS to a half Lebanese family, cooking has always been a huge part of Eaton's life. His younger years were spent cooking on open fires at Boy Scout camp out's where he achieved Eagle Scout and his first taste of cooking for others. While studying business at Mississippi State University.
After graduating college, he decided to follow his passion of cooking and enrolled at Johnson and Wales School of Culinary Arts in Charlotte, North Carolina. While attending Johnson and Wales, Eaton worked at Jim Nobles' Roosters Wood Fired Kitchen where he met his mentor Executive Chef Ramon Taimanglo. It was while working with Ramon that Eaton developed a passion to cook with local ingredients incorporating a southern flair. "Ramon not only taught me how to cook southern foods, he taught me how to treat people and to respect the craft of cooking."
After graduating Magnum Cum Laude from Johnson and Wales, Eaton moved closer to home to help open Domenica, a John Besh inspired Italian restaurant in New Orleans, LA. While at Domenica he studied Italian cooking under Alon Shaya, more specifically wood fired Neapolitan pizzas. After leaving Domenica Eaton decided he needed some Cajun food in his repertoire so he worked at Mr. B's Bistro under Chef Michelle McRaney.
Though his career path has taken him all over the country, Eaton had always wanted to return home and learn the business side of the restaurant from restaurateurs Al Roberts and Bill Latham. The trio with the addition of Executive Chef Mike Roemhild teamed up and opened Table 100 in Flowood, MS. As Chef De Cuisine Eaton achieved many accolades including Best Restaurant, Best New Restaurant and Best New Chef awards just to name a few.
The young chef was introduced to current business partner Steven Oneill by a mutual friend and the two hit it off instantly.   After leaving Table 100 Eaton set off around the country training for what would be The Manship Wood Fired Kitchen.  During his travels he worked for James Beard award winning chefs in Charlotte, Charleston, San Francisco and Birmingham.
The Manship Wood Fired Kitchen is considered by many to be a perfect balance of Mediterranean cooking with southern roots.  The restaurant is going on its third year and has received many accolades.  Eaton was recently named the Seafood King of Mississippi and will compete in the Great American Seafood Cook Off in New Orleans and the World Championship Cook Off in Orange Beach this summer.
Eaton brings with him a love for artisan foods, passion for locally sourced products and burning desire to make his friends and family proud.  He resides in Jackson, MS with his wife Jamie, Sons Louis Alexander & Levi Emmett, dog Snoop.