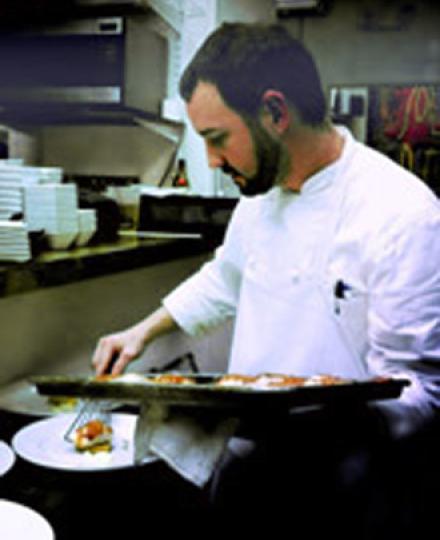 Terry White Owner/Executive Chef of Sage Restaurant in Tallahassee, Florida, discovered his passion for cooking as just a young boy, while sitting on his Grandmother’s kitchen counter. As a teenager Terry worked at a handful of local restaurants and began learning his way around the kitchen. While developing his culinary foundation, his thirst for knowledge and love for cooking continued to grow.
After high school, Terry graciously accepted a kitchen position at Roy’s Restaurant in Denver, Colorado. Through dedication, hard work and many long hours, he quickly moved up from his line cook position to Executive Sous Chef. After a successful run at Roy’s, he took a position at Clair de Lune, another well respected restaurant in Denver, serving French-Mediterranean cuisine. At Clair de Lune, Terry continued to learn, refine and grow as a chef until he decided he was ready to move back home.
Back in Tallahassee, Terry became Executive Chef of Mozaik Restaurant, and then two years later Executive Chef of Mon Pere et Moi Cafe. When the owners of Mon Pere decided to sell their restaurant, Terry purchased their business and reopened it as Sage.
At Sage, Chef Terry offers an eclectic, seasonal & multicultural menu showcasing the best local produce & seafood. Terry measures his success as a chef “by how many happy people leave our restaurant.”