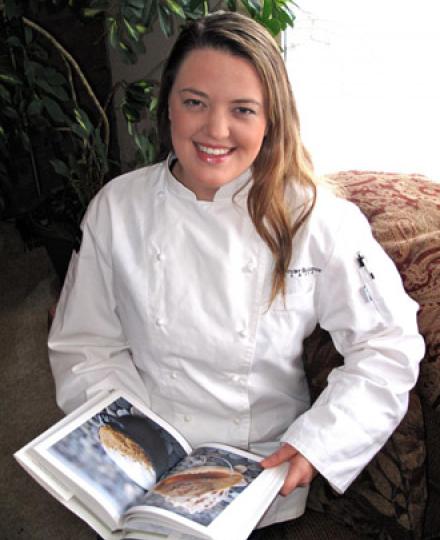 Mandy Dixon is the owner and chef of La Baleine Café, located along the unique and vibrant harbor in the seaside village of Homer, Alaska. The café serves regional and organic Alaska fare to fishermen, tourists, and locals. Dixon sources ingredients from the Kachemak Bay region, featuring Alaska seafood.
Dixon grew up in Alaska’s backcountry at a well-known Alaska fishing lodge her family owned and operated. After completing remote correspondence school, she left in 2002 to attend culinary school. She trained at Le Cordon Bleu in Pasadena, Calif. After working in restaurants for the next four years, Dixon realized her interest in dessert creations. She enrolled in the intensive pastry program at the Culinary Institute of America in St. Helena, Calif., in 2006. During school and following her graduation, she worked as a pastry chef for the Thomas Keller Restaurant Group in Yountville, Calif., before returning to the family business in Alaska in 2010.
In 2013 Dixon competed in the Great Alaska Seafood Cook Off, in which she tied for second place.
Dixon travels often in pursuit of her culinary education and in 2009 was a featured chef at the James Beard House in New York. She was the food stylist for the second edition of “The Winterlake Lodge Cookbook,” published in October 2012, and is a co-author of the upcoming “The Tutka Bay Lodge Cookbook — Coastal Cuisine from the Wilds of Alaska,” due out in fall 2014.