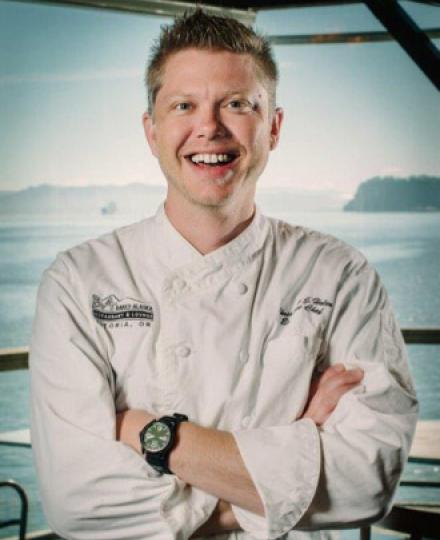 Chef Holen grew up a mile off of the highway just North of Anchorage, Alaska. After spending a good part of his early twenties travelling outside of the country he came to realize that food was the number one highlight of all the adventures and made the decision to make food his career. He is a graduate of The Scottsdale Culinary Institute with degrees in Culinary Arts and Restaurant Management and since 2000 have been self-employed, along with his wife Jennifer, in the restaurant business owning and operating a number of establishments.
The original Baked Alaska was a travelling soup kitchen of sorts, feeding masses at Alaskan music festivals in the summer of 2000. In late summer of 2000 Baked Alaska found its new home, a seven table café in Historic Astoria, Oregon. In early 2001 a Columbia River waterfront location became available and the new face of Baked Alaska became full service, with private dining, stunning Columbia River views and a cozy lounge. In 2004 he opened a new concept in Astoria offering a martini bar with light fusion cuisine and small plate tapas style menu. The Schooner bistro was a re-incarnation of what was once a classic dive bar, transformed in to an upscale bistro. The restaurant and bar, located in the historic Liberty Theater building quickly became the place to see and be seen in Astoria, playing host to a number of well-known musicians performing at the theater and visiting Hollywood actors in town working on movie projects. Astoria has been the backdrop for a number of films over the years. In 2008, after they had given birth to their daughter, the decision was made to sell the profitable restaurant and focus on their little girl, Anaise Rose and the waterfront Baked Alaska location.
Today, after nearly 14 years in Astoria and their most recent remodel the Baked Alaska now boasts a 100 seat waterfront dining room perched out over the Columbia River with a seafood heavy northwest ingredient focused menu and chef’s tasting menus. They have a private dining room for groups up to 30, a full bar with a dozen craft beer handles, infused liquors and a Northwest focused wine list including three varietals with their own private label. They have also opened an artisan pizzeria on the south end of the building, right on the Astoria trolley line.
They have become ingrained in this community and live by the mantra, “lucky to live here” as our restaurant has become a mainstay in the Columbia Pacific region. Chef Holen has cooked at The James Beard House in New York City on three separate occasions, twice on loan to another local chef assisting in their event and most recently had the fortune of being invited to represent his restaurant and Astoria in November of 2012.
He is a two time champion in the black box cooking competition in Tillamook, Oregon and also the reigning champion of The Iron Chef Goes Coastal event in Seaside, Oregon after winning in 2013. The Baked Alaska was on the Oregonian’s Gerry Frank Top 10 Oregon Restaurant list in 2013 and he participates in a number of state-wide food and wine events annually showcasing Northwest ingredients. In the past few years he have entertained 100’s of Astoria visitors with seafood cooking demonstrations and stories about Astoria’s history and recent renaissance.
Chef Holen and his Baked Alaska have catered many notable events over the years including The A & E television premier of the reality show “Axmen”, on the set of the blockbuster film “The Guardian”, The wrap party for the cast and crew of the Dreamworks movie “The Ring Two”, and the 25th anniversary VIP event for the cult classic, “The Goonies.” One of the highlights of his career is when he got to teach a cooking class alongside renowned Chef and television host Graham Kerr, of “the Galloping Gourmet” and that same week cooked a locavore tasting menu for Graham and his wife Treena for their 55th wedding anniversary.
Chef Holen surrounds himself by other very talented chefs and restaurant professionals to constantly keep the food real, utilizing the bounty of the Northwest and considers himself very fortunate to have found Astoria to call home. He spends much of his time teaching, learning and sharing. His newest adventure, Chef Daddy Brand seasoning salt can be found at Astoria’s own Sunday market, in his restaurant and on the world wide web.