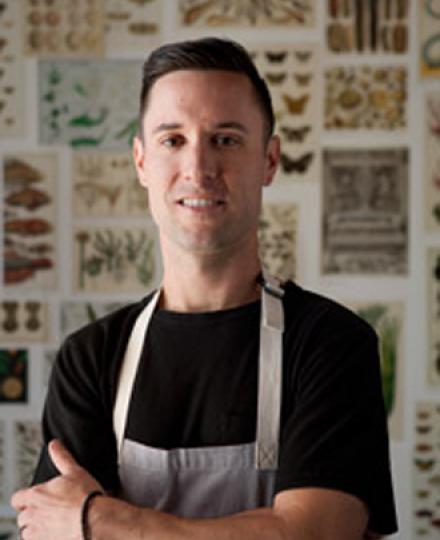 A native of Vermont, Executive Chef Briar Handly at HANDLE brings his passion for seasonally sourced and thoughtfully crafted American food to Park City. Since recently opening HANDLE, this past July 2014, Chef Briar’s focus has been to transform ones notion of familiarity through unexpected food and libations. He’s done just that by showcasing the abundance of local and regional ingredients available to him through his own creative twists and reinterpretations of classic American cuisine.
A graduate of the New England Culinary Institute, Handly has spent the past 15 years perfecting his craft in the Park City market. Before HANDLE he held the position of executive chef of Talisker on Main since it’s opening in December of 2009, garnering numerous awards including Salt Lake Magazines Best Restaurant in Park City for three years in a row. In this time he was also an integral part in the opening of the Michelin star rated sister restaurant of Spruce, San Francisco. Handly has further refined his skills with numerous stages across the country including a notable stint at The Restaurant at Meadowood in Saint Helena, CA and other note worthy restaurants in Bermuda, Atlanta and Colorado. In late 2008 he launched a successful Park City‐based catering and event production company, BASH Event Solutions, and is excited to build that business in conjunction with HANDLE restaurant.
Handly has spent much of his time traveling and eating his way through South East Asia and Europe to further develop his innovative and globally inspired food. He resides in Park City with his wife Melissa and three dogs. During his free time he enjoys foraging, mountain biking, snowboarding and racing motorcycles.